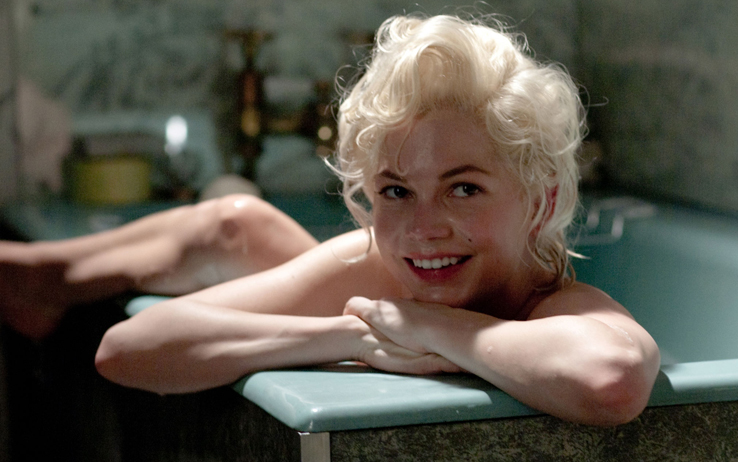 Young Colin Clark (Eddie Redmayne) is ready to start a new career and has his heart set on the movies. He met Sir Laurence Olivier (Kenneth Branagh) at one of his dad’s parties once, and is holding onto a promise of a job.

When fresh-faced Colin turns up at Larry’s office in London, he’s offered a post as a runner on his new film, The Prince and the Showgirl – the showgirl being played by Marilyn Monroe (Michelle Williams), on a rare visit to the UK.

The film is billed as bringing together the world’s greatest actor and the world’s greatest celebrity – no prizes for working out which is which – but coming from different worlds, the pair don’t hit it off, leading to no end of difficulties getting the film in the can.

Colin ends up living out every boy’s fantasy, being assigned to be Marilyn’s friend – to keep her happy, to make sure she makes it to the set each day; My Week With Marilyn chart’s Colin’s experiences, as he tends to her every need, becoming her confidant through her moments of insecurity and consequently wielding as much power in the production as Olivier himself.

This film is based on the diaries of Colin Clark, who went on to become a film-maker in his own right – but the start of his career was almost certainly given a boost by his relationship, for want of a better word, with the biggest celebrity of her day – possibly of any day – Marilyn Monroe.

Colin Clark came from good stock – his father was the historian Kenneth Clark and his brother the MP and fellow diarist Alan – but he was determined to make his own way in life.

His youthful naivety and steep learning curve are portrayed with hopeful maturity and suitably misguided exuberance by Eddie Redmayne, in a performance which deservedly lifts him from the sidelines to centre stage.

Kenneth Branagh – arguably the Larry of his day – looks and sounds remarkably like his predecessor and it’s delightful to watch him descend from sychophancy to exasperation as he struggles to get an acceptable performance from Marilyn, who’s held back by her insecurities – and not helped by her acting coach Paula Strasberg (Zoë Wanamaker) or production partner (Dominic Cooper) who think their intefering is helping. The best moments of the film certainly include Branagh’s Olivier breaking his demure façade and throwing hilarious temper tantrums. Much of the pathos of his performance comes less from his disappointment that Marilyn can’t really act than from the fact that his initial hopes that he might get to have a little fling are quickly dashed; it’s more his damaged ego than his professional concerns.

But whether this film succeeds is down to Michelle Williams and how she portrays the ultimate blonde bombshell. Playing a real-life character is nothing new for Hollywood’s biggest stars, but to become perhaps the most iconic woman of the twentieth century, is taking on a formidable responsibility, and from the breathy voice to the flirtatious demeanour, nervous smile and the added pounds to give her the required extra curves, Williams hits the nail on the head.

An impressive roll-call of British talent, including Dame Judi Dench, Julia Ormond, Emma Watson and Toby Jones all effectively bring to life the supporting characters in this story.

Seeing so many British actors playing American – including Dougray Scott’s Arthur Miller – betrays a low budget, and shooting a film about the shooting of a film at the very studio where the original film was shot must also help to keep the spending under control — all of which will have freed up money to help the recreation of the period.

It fits comfortably into the revealing genre of films about the making of films – such as François Truffaut’s Day For Night, Tom DiCillio’s Living In Oblivion and even Frank Oz’s more recent Bowfinger – with the added dimension and responsibility of being a biopic.

But while there’s much to admire about the film – particularly the performances – it feels surprisingly small for a tale about some of the biggest stars of their day. Some of the elements of the story don’t feel as convincing as they might; we clearly have to take Colin Clark’s word for what happened. Emma Watson’s storyline feels more suited to a soap-opera than a feature film. And some of the storytelling feels incomplete or confusing; it’s unclear whether the Prince and the Showgirl ever got finished – it did, by the way, although there’s little in this telling of the story that suggests it could possibly have made it from the hopeless mess on the soundstage to a BAFTA-nominated film.