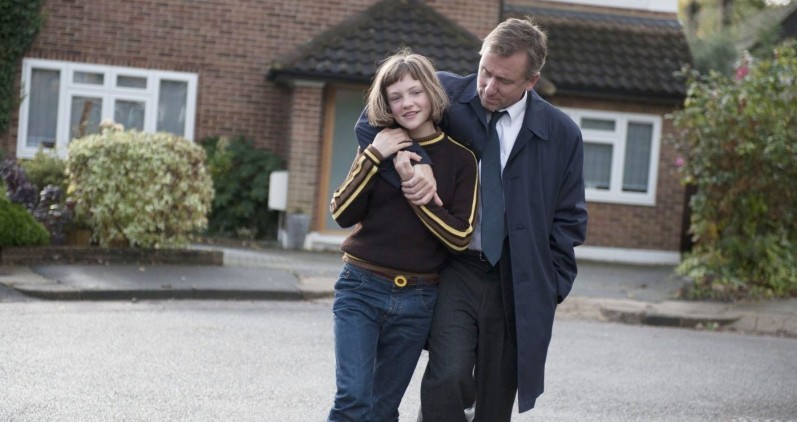 When loose cannon Bob Oswald (Rory Kinnear) finds out one of his wayward teenaged daughters is pregnant, he demands to know who’s responsible. Scared of disclosing the truth, she points out of the window to her simple neighbour Rick (Robert Emms), who’s washing a car in his driveway.

Like a shot, Bob storms outside and Rick finds himself bemused and beaten on the tarmac. Another neighbour, Archie (Tim Roth), comes to help him. He lives across the road with his lonely but loving daughter Skunk (Eloise Laurence), who’s nanny (Zana Marjanovic) is dating her teacher (Cillian Murphy).

Eloise soon finds herself attracted to a local yob (Bill Milner), forming a relationship that grounds her, while bringing its own problems.

Allegations of abuse, violent beatings, betrayals and loyalty all fight for pride of places as tension bubbles to the surface of a quiet suburban cul-de-sac that portrays what David Cameron might once have referred to as “Broken Britain.”

Rufus Norris is an accomplished stage director but this is his first visit to the big screen. Surrounding himself with a powerful cast is the first step to ensuring that he delivers one of the strongest independent British films of the past few months, already securing awards and nominations at events from last year’s London Film Festival to the British Independent Film Awards.

Tim Roth is an assured presence at the heart of the film. Cillian Murphy’s teacher sees his world collapse around him but remains sympathetic as he’s forced to reevaluate his life. Rory Kinnear is astonishing – and frightening – as the violent single father who’s the worst possible example to his three daughters in every way except his fierce loyalty to them. But the revelation of the film is newcomer Eloise Laurence, who’s rightly received recognition for her magnetic screen presence.

Maintaining a multi-strand narrative and bringing the ends together satisfactorily is no mean feat, yet first-timer Norris handles this task effectively. But the film’s main weakness is the narrative itself; part soap-opera and part melodrama, what starts as an interesting enough and largely believable set of inter-twining tales becomes a pessimistic, overbearing bloodbath.

The film is ostensibly set in a typical residential cul-de-sac, but it’s not like any cul-de-sac I’ve ever visited. We meet three families and each is every bit as dysfunctional as the next. It requires a little too much suspension of disbelief, which lets down a film that’s so firmly placed in what’s being sold to us as the real world.

And although much of the action is viewed through Skunk’s eyes, as the plot begins to unravel, it becomes a little too unfocused, making it hard for us to decide where to focus our sympathies and attention.