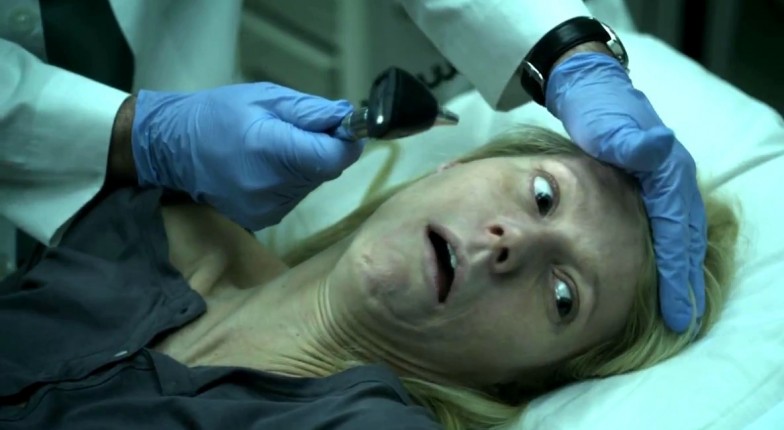 Beth (Gwyneth Paltrow) returns from a business trip to Hong Kong with a bit of a cough. Two days later, she’s dead. The doctors explain to her husband Mitch (Matt Damon) that she had picked up a virus during her trip – and brought it back.

When someone in Chicago comes down with the same virus, it emerges that she stopped off to meet an ex-lover on her way home to her family.

Within days, cases of the mysterious virus are being reported across the country – and across the world.

America’s Centers for Disease Control dispatches staff (including Kate Winslet) to the worst affected cities, where sufferers are quarantined in local sports venues.

The World Health Organisation sends an expert (Marion Cotillard) to Hong Kong to try to identify the source of the outbreak.

Back in the US, government health officials (including Laurence Fishburne) work to control the panic and prepare a vaccine, while anti-establishment blogger Alan (Jude Law, with an accent as wonky as his teeth) stirs up public unrest with his claims of a vaccine and allegations of corruption among the authorities.

How many people will die before the contagion can be identified and controlled?

“Nothing spreads like fear” says the poster. Perhaps paranoia would come a close second, because once you’ve seen this film, you’ll be wearing a Wacko-Jacko facemask in public and refusing to shake anyone’s hand.

While it might seem a little over the top a reaction, watching the whole world struggling to cope with the rapid spread of an unknown virus feels frighteningly real. It will bring back memories of a couple of years ago when we were seeing such scenes on the news as the H1N1 swine flu was at large. At the time, you might have felt that the authorities were over-reacting. After seeing this film, you’re more likely to feel that they didn’t go far enough.

In that sense, Contagion is a thoroughly effective horror film – but it’s a horror with little humanity at its core.

There are so many characters that each of the many stories is too short and insignificant for us to get to love and care for those involved. It can be dramatically effective to focus on a handful of individual cases, rather than talk about broad-brush figures – they do it on TV news all the time, after all – but this can also belittle the problem.

“This woman is ill” isn’t quite as frightening as “millions might die.” That said, it’s always fun – and of course surprising – to see big names being killed off quickly.

One of the big failings of the recent, similarly-themed Perfect Sense was that no attempt was made – even by the epidemiologist at its heart – to find the virus and a cure – that is, at least, one of the key elements here. We do get a sense of the desperation of the people the world is relying on as they scramble, against the odds, to heal the world.

But while some of the storylines are powerful – Kate Winslet’s heroic attempt to help sufferers is particularly effective, others – such as the World Health Organisation’s efforts – fall rather flat.

A director who refuses to be pigeonholed, Steven Soderbergh is veering narratively back towards Traffic territory, with a large ensemble cast acting out contemporaneous storylines across the world with a single over-riding theme – using an intimate hand-held camera and varying the colour-palette depending on whether the virus is on screen or not.

The early stages of the film, as the virus begins its rapid attack on the population, are thrilling, and the breakdown of society as looting erupts out and the healthy turn on each other, feels as real as it does alienating – and makes you ashamed to be human.

But when you get to the stage where the doctors say “Once we identify the source, it’ll be a few months before the vaccine is ready,” while the very thought of the wait is scary, it brings the dramatic flow to a shuddering halt; we go from the frantic desperation of the first few days to gaping holes in the action.

The film draws to a close with a flash-back to day-one of the outbreak as the source is finally identified, but by that point, we don’t really need to know anymore. There are other more important things now and the film has already reached its narrative conclusion. In the language of cinema, it’s presented as a huge twist – a revelation that would change your whole understanding of the story – but in truth, it’s little more than an interesting aside, that doesn’t really add much and feels like more of an anti-climax than a Sixth Sense-style game-changer.

Contagion is ambitious and many of the strands would have worked as films in their own right, while others would have needed films of their own to justify any screen-time at all.