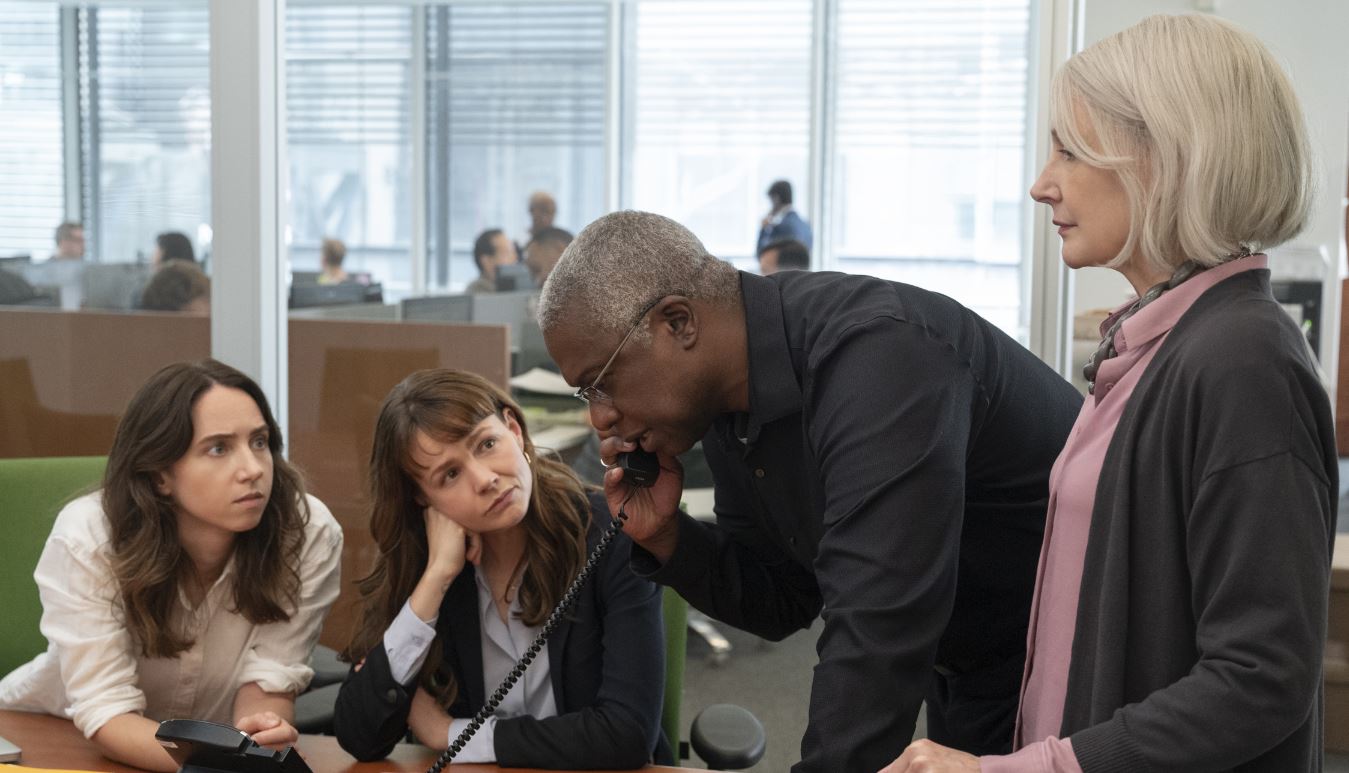 In late 2016, New York Times investigative reporter Megan Twohey (Carey Mulligan) was trying to expose sexual misconduct allegations against the then presidential candidate Donald Trump. Her colleague Jodi Kantor (Zoe Kazan) was uncovering tales of Syrian Refugees. Some months later, Kantor received a tip-off that an un-named, well-known Hollywood film producer had been sexually abusing and bullying women in the industry for decades.

The most prominent of the alleged victims at this stage is the actress Rose McGowan and Kantor does her best to persuade her to go on the record – but to no avail; she’s gone public before and nothing ever came of it.

As Kantor’s her investigation continues, she finds a string of actresses and assistants who’d worked for the multi-Oscar winning career-maker Harvey Weinstein – they all have similar stories, involving hotel rooms, bath robes and massages, but can’t find one who’s prepared to put her head above the parapet.

Twohey joins the investigation and the pair continue to dig, desperate to find anyone who can corroborate the stories – from accountants who paid off complainants to lawyers who made them sign non-disclosure agreements.

Their editors are desperate to publish the story, but even a whiff of competition from a rival publication won’t persuade them to go with the story until it’s water-tight.

When it looks like a big star might agree to go public, Weinstein himself tries to undermine the story before it reaches the public – but when his victims and enablers realise he’s running out of room to manouevre, they allow Twohey and Kantor to use their names to force his crimes into the open.

The world of entertainment – still reeling from the Oscars So White scandal – was grabbed by the neck and shaken to its core by the revelations about Harvey Weinstein. The #MeToo and #TimesUp movements spread across the world, empowering the victims of sexual harassment – and worse – to fight for justice.

Gone were the days of allegations being dismissed as “He said, she said” – the victims were finally being heard – now was the time for “She said.”

The film of that name follows the investigative reporters Jodi Kantor and Megan Twohey as they try to stand up the explosive allegations by tracing as many of Weinstein’s victims as they can – but there is a bit of “he said” too, in the sense that they’re also trying to get information from his lawyers and accountants – and Weinstein himself (voiced by Mike Houston) sticks his oar in from time to time too.

Following an investigation of this sort recalls Spotlight, which told the story of the journalists who exposed the sexual abuse of children by priests in the Catholic Church in Boston – but that somehow felt like a more urgent film.

One problem with telling this story is that it’s recent enough history that everyone knows what happened, so there’s not much drama associated with the big question of whether they’ll be able to confirm the story and get it published. Similarly, the story is still ongoing, with a trial currently underway in Los Angeles and another still to come in London.

Perhaps one of the most powerful moments in the film was the use of a real-life recording of one of Weinstein’s victims, trying to resist his advances, as the camera drifts down an empty hotel corridor. Other elements of the real story also make it into the film, with some of Weinstein’s highest profile victims participating themselves; Gwyneth Paltrow – who won an Oscar for one of Weinstein’s earliest hits, Shakespeare in Love – adds her voice to her character, during phone conversations with the reporters, and Ashley Judd appears on screen as herself, as she describes her experiences and struggles with whether to allow the paper to use her name.

But this is another weakness of the film’s narrative – rather than being a film about two journalists digging deep to uncover a scandal, it turns out that it was such an open secret in Hollywood that everyone knew what was going on and who the victims were – and the victims were happy enough to talk about it – even those who’d accepted six or seven-figure settlements. The problem wasn’t getting the story – it was getting the sources to agree to go public, which isn’t quite as dramatic; even Weinstein’s lawyer seems to be happy to disclose wrong-doing and when the pieces finally start to fall into place, it’s less to do with anything Kantor and Twohey did than it is because a key character simply decided that the time was right to play ball.

The central performances are strong – as the two women are determined to expose Weinstein’s crimes – but eschewing one of the first rules of film-making, “show, don’t tell,” She Said has much more tell than show; we don’t see – or even hear from – that many direct victims – many of his misdeeds emerge through exposition – and many of those who eventually went on the record weren’t victims of harassment or bullying, but witnesses to it.

And unlike Spotlight, in which the victims of child sexual abuse described how the institution of the Catholic Church conspired to protect paedophile priests, this is largely about a powerful individual who used his own money and influence to silence his victims and those who could damage his reputation; unlike the Church, Hollywood was never the kind of institution people would trust with their lives – the victims weren’t helpless children but ambitious aspiring stars or film executives, and the conspiracy to protect him largely involved bribing his own victims to keep quiet.

While the victims’ movements spread rapidly around the world, it wasn’t the case that – like the Church – there was an organised central organisation protecting a ring of abusers – Weinstein appears to have been one of an undefined number of powerful individuals, abusing their influence to commit heinous crimes.

The reporters and their sources brought one man’s reign of terror to an end – but how this story will resonate outside the film industry is not so clear.