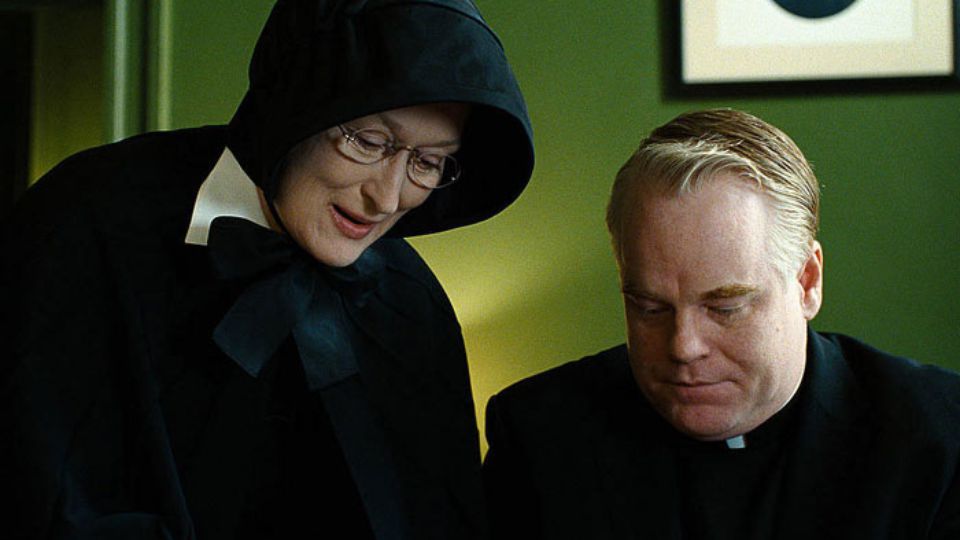 In mid 1960s New York, Sister Aloysius (Meryl Streep) is the principal at a very strict Catholic school. Father Flynn (Philip Seymour Hoffman) is the much-admired priest, who oversees the religious development of the pupils – as well as teaches them PE.
When one of his altar boys, Donald (Jospeh Foster) is caught a little the worse for wear on altar wine, he’s removed from the role and his mother (Viola Davis) is called in to see the principal.
Sister Aloysius thinks there’s rather more going on than meets the eye.
She has no doubt that Father Flynn has been getting Donald drunk on altar wine and then doing – well – whatever Catholic priests do to drunk altar boys.
Sister Aloysius begins a campaign to bring Father Flynn to justice and remove him from his position, despite the doubts of her more trusting junior teacher, Sister James (Amy Adams).

This is, to a large extent, an acting masterclass. Streep and Seymour Hoffman don’t put a foot wrong, as their characters battle verbally across the principal’s office. Their Oscar nominations are richly deserved. As are those of Adams and Davis, who offer impressive supporting performances.
But the film doesn’t jump off the screen – as presented, it belongs more on a stage and the subject matter feels tired – it’s hardly surprising to find a situation where a Catholic priest is accused of abusing young boys and there’s disagreement among those around him about whether he’s guilty or not.
Perhaps the only original element in this telling of the story is the reaction of the mother of the boy in question – in a heart-wrenching turn from Davis.
But with neither of the key characters being particularly sympathetic, the film doesn’t grab you emotionally – in fact, it rather leaves you cold.