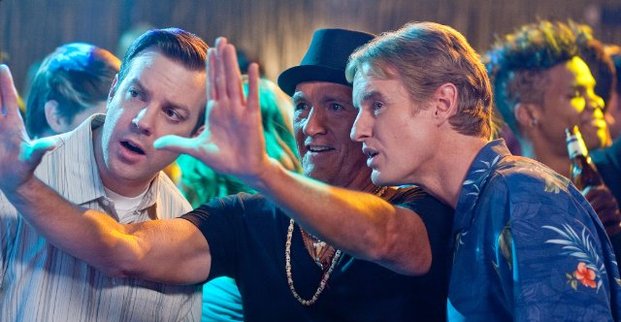 Rick (Owen Wilson) and Maggie (Jenna Fischer) are a happily married couple with a couple of kids. But while they’re deeply in love, there’s something missing from their relationship.
When they get home from a rare date night, while Rick is putting the kids to bed, Maggie pretends to be asleep to avoid having to have sex.
Their best-friend couple, the wannabe lad Fred (Jason Sudeikis) and his over-bearing wife Grace (Christina Applegate) have a more overtly antagonistic relationship – but the warmth oozes out from beneath their frosty exterior.
Both women think they’re happy, but they’re not quite sure. But they’re both sure that their husbands aren’t happy, so taking the advice of an older friend, they decide to offer their husbands what they call a “hall pass” – a permission slip, allowing them a week off marriage. The idea is that by removing any guilt their husbands might feel if they exercised their carnal urges, as they hover on the brink of their mid-life crisis, they can get rid of that curiosity forever and realise that they already have the only woman they’ll ever want.
It’s a gamble – but Maggie and Grace are worried their marriages won’t survive unless they take it.
They women make themselves scarce for a week, leaving Rick and Fred to enjoy the freedom of their student days, as their friends (including a geeky Stephen Merchant and a predatory Richard Jenkins) respectively watch and help them hunt women to prove to themselves that they’ve still “got it.”

Having found puerile comedy in everything from obesity and incest to split personalities and conjoined twins, the Farrelly brothers are determined to batter their audience in yet another shocking arena for their latest movie.
This time, as the pair are growing up, so are their protagonists, and indeed the source of their humour. Hall Pass tackles the spectre of a mid-life crisis, using the notion of permitted adultery to save a marriage.
But while the film contains its fill of cheeky, painfully funny laugh-out-loud moments, the brothers don’t push as hard as they have done with their previous comedies and it’s clear from the start which side of the decency line (which separates what you can watch with your Mum from what you can’t) this is going to end up.
Every step of the way, every move every character makes is completely predictable. I don’t even need to hint at whether it will be the over-confident one or the reluctant one who actually finds himself a good woman? Or whether having found said angel, he actually has the balls to go through with it; he has a ‘hall pass,’ after all. And what will his wife be doing all this time? Gardening? Knitting? Baking? Or surprising herself by realising that she can be attracted – or at least attractive – to another man?
Despite giving us no prospect of surprises, the Farrelly brothers’ own winning formula keeps us onside throughout.
The performances of the leads are a delight. Owen Wilson and Christina Applegate come close to delivering heart-breaking turns, while Jason Sudeikis and Jenna Fischer graduate from TV (Saturday Night Live and Steve Carrell’s American Office, respectively) to the big screen with honours.
And while the plot itself is predictable, it doesn’t make the journey any less enjoyable to follow.
The film is a piece of silly fun as you might expect from the Farrelly brothers, but it doesn’t have anything like the bite of their earlier work, but as their audience follows them into middle age, perhaps many people prefer to cuddle up with their dogs than play rough with them.
To a large extent, they have calmed in their old age, giving their leads the tear-jerking warmth, or at least bitter-sweet drama and leaving most of the crazy humour to a cast of eccentric supporting characters, including Stephen Merchant, in his first significant outing without his mentor Ricky Gervais, and the all-knowing sex guru Richard Jenkins, by a long shot the oldest man on screen.
Much of the humour will take you (or more likely American audiences) back to the days when pupils had to ask for a hall pass to go to the toilet during lessons. The way these middle-aged men yearn to seize back the bravado of their youth is endearingly child-like.
Perhaps the most surprising thing about Hall Pass is that one of the finest comic actors of his generation, Owen Wilson, delivers one of his straightest and most empathetic roles in a Farrelly Brothers’ comedy.