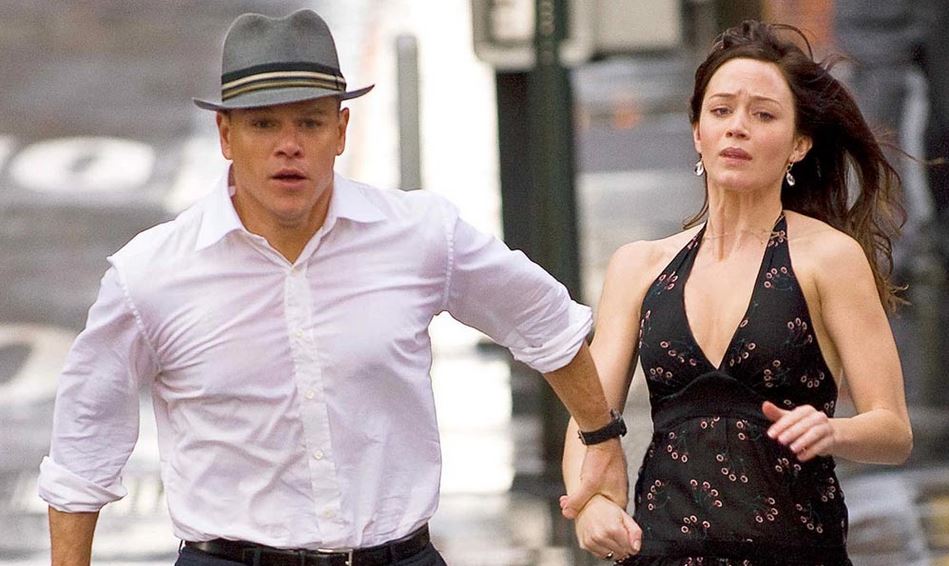 Young politician David Norris (Matt Damon) has a bright future ahead of him. With his charisma, he could go all the way to the White House, but his first run for the Senate doesn’t go so well after photos of a college-prank are released to the press.

As he’s rehearsing his concession speech, he meets a flighty young party crasher, Elise (Emily Blunt), who’s hiding from security in the men’s toilets at the plush hotel where his campaign is based.

They connect – both figuratively and literally – but they’re broken up before they have a chance to exchange numbers.

So, how fortunate it is that they bump into each other again on a bus, not too long afterwards.

But this time, a team of men in grey suits and fedoras, carrying battered books filled with complex, animated graphs and linear diagrams are conspiring to keep them apart.

When David comes close to uncovering what’s going on, Richardson (John Slattery) explains that it’s not in the plan for him and Elise to be together; that would stop him reaching the highest office in the land and prevent her attaining her dreams of becoming a dancing sensation.

Headstrong David is determined to go for what he wants; why can’t he have his perfect woman and still win the presidency?

Quicker than he can devise a way to find her, every one of his plans are scuppered by the superhuman powers of the men in hats, as they adjust the present to fit their predetermined fate.

But when one of them (Anthony Mackie) starts to have doubts about the plan, the conspiracy starts to falter.

The latest of many science fiction films to come from the writing of Philip K Dick, this unquestionably presents us with a fascinating idea, that there might be a team of people, keeping an eye on us and adjusting our lives to fit a predetermined path. Some might even call them angels.

But with Matt Damon running around like a bemused Bourne, peering through a handful of doorways into some sub-Inception visual effects, this aspires to greatness but pales by comparison to its forebears.

There’s never really a sensible suggestion as to why David and Elise can’t be together in the first place and then when doubts are raised within the bureau, that’s all too convenient and there’s no attempt to explain any discrepancy.

And the men in hats seem to be taking it all a little too seriously. In some such films, the existence of the world is at stake, or at least the lives of the main characters – here, it’s just a relationship that hasn’t even had a chance to begin. Do we care so much about these individuals that we’re willing to spend a hundred minutes watching Hollywood’s latest special effects team trying to keep them apart, lest they fail to get the jobs they want?

In the end, there’s no real point in trying to think too hard about what’s going on, as at any moment, you feel the story could just be whipped away from under you like a fully laden table-cloth.

Ultimately, you’re left with a beautiful couple, running around New York City, determined to be together and achieve their dreams, trying to outrun a uniformly attired team of company-men – perhaps the predecessor’s of Little Britain’s computer that says “no.”

And the device used by the bureau to enable its staff to adjust people’s lives is so laughably frivolous as to leave you wishing they’d adjusted the plot a bit.

This was a film with promise, with fresh and ambitious visuals, trying to tackle such heavenly issues as destiny, but the details of its plot weigh it down and remove the gravitas it seeks, leaving it as an enjoyably silly romp.