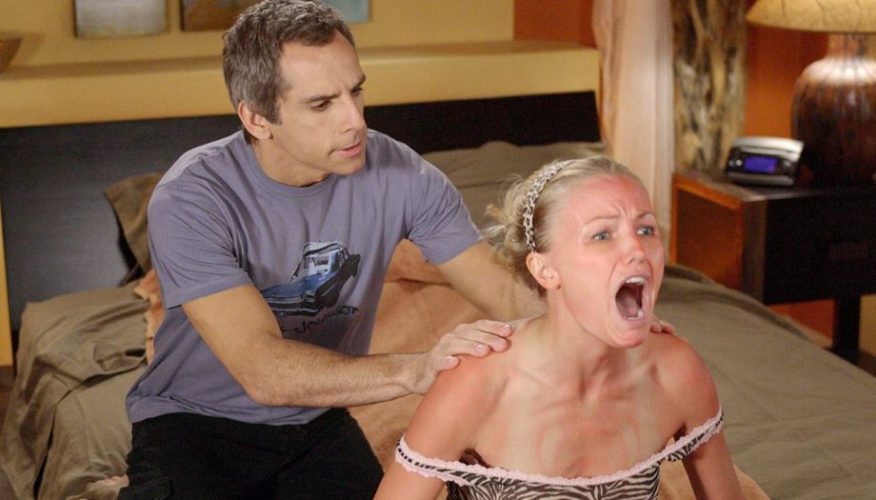 Eddie (Ben Stiller) is forty and single – and fed up with it. When he finds himself at the children’s table at a wedding, he knows things have got to change.

A chance encounter with the beautiful Lila (Malin Akerman), when she drops her laundry in the street, leads to a whirlwind romance and before he knows it, Eddie and his new wife are speeding up the freeway on the way to their idyllic honeymoon retreat.

But Eddie hadn’t been aware of Lila’s penchant for singing to cheesy songs in the car, her stubborn determination to get a suntan, against his advice, or indeed the fact that her work as an environmental researcher is unpaid.

Even her rather, well, energetic – shall we say – sexual practices catch him a little off guard.

But what really throws the spanner in the wedding works is a meeting with the woman of his dreams – country girl Miranda (Michelle Monaghan) is at the same resort for her annual family get-together.

With a red-raw Lila confined to the honeymoon suite, Eddie finds himself spending more and more time with Miranda, until he falls head-over-heels for her.

Reteaming the directors and star of There’s Something About Mary and giving them a classic 1970s comedy to update, this should’ve worked considerably better than it does.

The Farrelly brothers fall uncomfortably between two films – they can’t decide whether to give us the gross-out comedy of some of their earlier hits or go for a more traditional rom-com. The result is that the tone of the film swings wildly back and forth, with the gross-out moments – and there are many – feeling contrived.

Presumably, we’re meant to feel that Lila is just so unbearable that Eddie’s emotional transgressions are understandable, but she’s nowhere near close enough to the kind of comic grotesque such a story arc would require. And in reality, it’s kind of his own fault for marrying her before he finds out just how irritating she can be.

This all makes the film little more than a glorification of adultery – are we really meant to identify with an immature protagonist who hastily marries the first woman who’s up for it and then falls instantly out of love with her when the next woman comes along? Were it not for the fact that Michelle Monaghan ticks all my boxes, I certainly wouldn’t.

OK, so of course we’re not meant to take the plot seriously and any lessons to be learned are superficial and no-brainers (don’t get married in haste…and so on), but the humour is too simplistic to make the relationships in any way charming, the supporting cast is padded out with clichés and the jokes simply aren’t clever enough.

It’s no worse than most of the Hollywood sausage machine’s mediocre rom-coms, but it’s certainly no better – and with these ingredients, it should be.

Only the coda to this film presents a worthy comic moment – and it’s almost worth sitting through the disappointing first hundred minutes to get there.