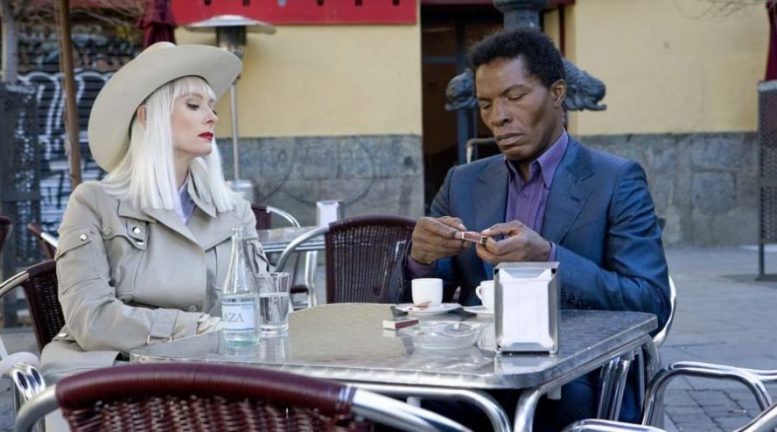 A mysterious loner (Isaach De Bankolé) receives some instructions from two men in an airport departure lounge and jumps on a plane to Spain.

Following the instructions, he sets himself up in a Madrid apartment and heads to a café for a rendezvous.

A violinist (Luis Tosar) turns up, spouts some eloquently phrased truisms and produces a matchbox, which he swaps for the one our loner brought with him. When the violinist leaves, the loner opens his new matchbox to find a small piece of paper, bearing a cryptic code and then – ahem – eats it.

Back at his apartment, he finds a naked woman (Paz de la Huerta). Back at the café, he has another meeting, this time with a verbose, white-haired cowgirl (Tilda Swinton), who swaps another match-box with him. Again, of course, he eats the code he finds inside.

During his odyssey, he also encounters a guitarist (John Hurt), a Mexican (Gael García Bernal) and an American (Bill Murray), holed up in a secure compound – evidently the Holy Grail at the end of his unexplained search.

Jim Jarmusch rightfully has a reputation as a maverick film-maker, not too worried about what other people think of his work.

After his most recent film, it might have been thought that he’d come in from the cold – Broken Flowers was full of the director’s idiosyncratic flourishes, but it centred on a character whose plight we cared about, with a story we could follow.

But after his most accessible film, he’s flipped back to something that’s rather more of an acquired taste.

It’s never explained what the loner is doing or why. Is he on a mission for some unknown employer – or for himself? What are all these codes he’s eating? Who are all these figures he’s meeting?

Jarmusch doesn’t come close to providing any answers – which is perhaps unsurprising, since he started shooting without a script, so he probably didn’t even know where it was going himself until it was finished.

The performances themselves can’t be faulted – but all the big names have little to do except sit down, reel off some self-important but meaningless lines, hand over a match-box and exit stage-left.

There’s no doubting that the photography from Ang Lee and Wong Kar Wai collaborator Christopher Doyle is beautiful – if the locations are less enthralling – although Jarmusch provides us with an interesting mixture of familiar Spanish scenes (flamenco bars and plaza-cafés) and images of Spain we haven’t seen before, like the stunning architecture of the apartment building.

It’s one of those films that art-house enthusiasts will be desperate to love, but it’s a little too far removed from logic and emotions to provide an experience that’s satisfying in any way more profound that its look.

There doesn’t seem to be too much point in trying to work out what’s going on, because that’ll lead to frustration and turn you against the director.

And the biggest crime of such a self-indulgent film is its length – it’s far too long and slow for a film where so little happens.