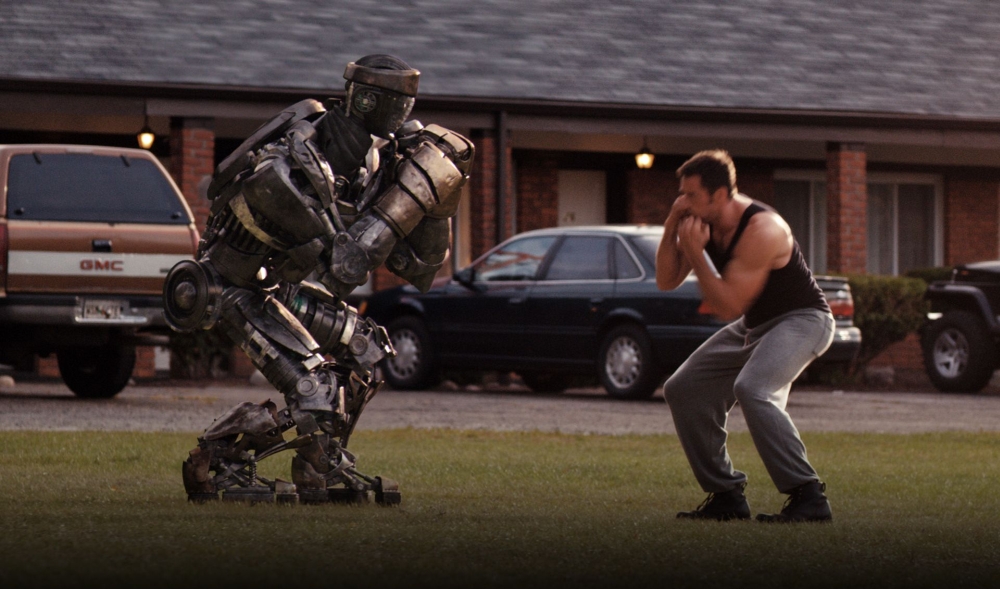 Former boxer Charlie (Hugh Jackman) is down on his luck and desperate for money. He’s too old to fight now but the world has moved on anyway – the fans just want to watch nine foot tall robots smashing each other to smithereens in the boxing ring. But robot boxers don’t come cheap.

Charlie drives around with a battered old robot, Ambush, building up debts as a travels, so when Ambush gets destroyed in a fight, he has creditors to pay and no way of raising any cash.

Then – to make things worse for our self-centred anti-hero – his estranged young son Max (Dakota Goyo) is thrust into his care. He can’t even feed himself, so how is he going to look after a kid?

Charlie survives on the fading goodwill of his on-off girlfriend Bailey (Evangeline Lilly), whose late father owned the gym where he used to train and that he now uses as a workshop for his robots. Bailey is, herself, handy with a screwdriver, which is useful – but like everyone else in his life, she’s beginning to lose faith in him.

Like a losing gambler who doesn’t know when to quit, Charlie heads off to find himself another robot boxer, having no idea of how else he might be able to make money, but this time, he has Max in tow. And it’s Max, not Charlie, who finds a robot – but Atom isn’t a fighting model; he was designed to be a sparring partner.

Nevertheless, he’s the only chance they’ve got; with Charlie reaching back into his boxing past and Max injecting personality into the metallic gladiator, they prepare Atom to work his way up through the small-time fights to win a place in the big league.

The basic premise of this film seems almost too bizarre to try to relate to anyone who hasn’t seen it. “Oh – it’s about an out-of-luck guy who travels the country with his robot boxer.”

But surreal as it sounds, the film-makers actually manage to pull it off – to a degree.

Predictable and familiar as it seems, the father-son bonding is charmingly done – it is, of course, a necessary convenience for the plot that Max’s only hobby forms the backbone of Charlie’s very existence.

From the heart-warming child-centric human bonding to the underdog comes good story set in a sci-fi world, Real Steel feels like it had Steven Spielberg’s fingerprints all over it – indeed, he was the executive producer. But he neither wrote nor directed it and while the themes are no strangers to his work, this is not a film the master would have been particularly proud to have made.

As well as following all the typical narrative twists and turns for the genre without exception, the plot is bursting with inconsistencies, such as characters apparently being able to cross the continental United States in a matter of minutes and the oldest, most clapped out robot seems to have the most advanced box of tricks, but its target audience – boys in their early teens – will be enthralled by the boxing bots and won’t mind about such details.

It’s a shame that a couple of bad words and a little human violence when Charlie’s creditors catch up with him, earn Real Steel a 12A certificate, rather than a PG, because this would be perfect fodder for Dads to take their ten year old sons to, to get them away from their games consoles. Indeed, for much of the film, watching Max control Atom is like watching any other child of his age playing a computer game. And watching the film is pretty much like watching the screen while a gamer is in action.

And as we’ve seen in sporting films from last month’s Warrior right back to Rocky and beyond, there’s nothing like a tearful girlfriend’s nervous anticipation or gleeful celebration at ringside – or even at home – to rouse the audience and tug on the heart strings.

The girlfriend in question here, Evangeline Lilly, is effective enough, but it’s not a particularly demanding role; she hasn’t yet lived up to the expectation suggested by her breakthrough role on TV’s Lost. Hugh Jackman is pretty much on auto-pilot – as if there was someone controlling him with a handset – but he delivers cantankerous, helpless, hapless and hopeful when the script requires. Newboy Dakota Goyo is a little arrogant at first but, like Jackman’s character, softens when the plot requires. But without question, every other supporting character comes straight from central casting – the well-meaning auntie who doesn’t get the kid, the ruthless foreign antagonist, the callous cowboy creditor – but it’s the kind of film which is helped, rather than hindered by this.

The robots, of course, are the real stars – you can almost feel the merchandising action toys being shoveled off the shelves. It’s not surprising that even before its release, it’s already got a sequel penned in.