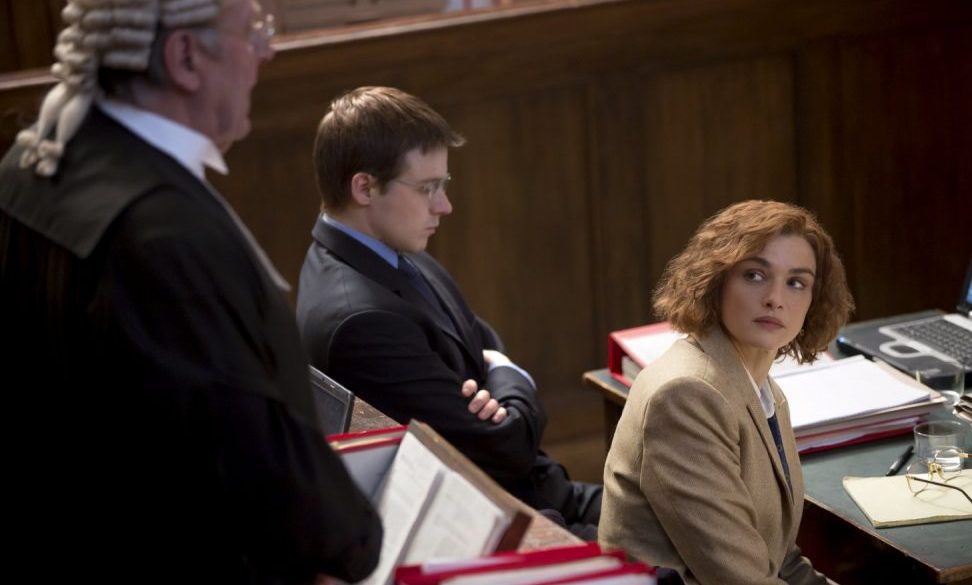 Taking exception to the way he was presented, some years later, he sued Lipstadt and her publishers for libel.

Irving brought the action in the British courts, where the onus is on the writer to prove that what was published was not defamatory, rather than requiring that the defendant proves that it is. This forced Lipstadt to head to the UK to defend her own reputation as an historian.

With Princess Diana’s divorce lawyer Anthony Julius (Andrew Scott) leading her defence team and the barrister Richard Rampton (Tom Wilkinson) representing her in court, the scene is set for a war of worlds that put history itself on trial.

By virtue of its subject matter, Denial attempts to dissect history in general and the Holocaust in particular. Whose view counts? Can rival opinions both be right? Should rival opinions be considered? Does coming at facts with your own prejudice invalidate your view of the facts? Should you have to disclose your beliefs in order for your arguments to be considered?

The film begins with an interesting scene in which Irving himself ambushes Lipstadt at a talk she’s giving in the US and she refuses to engage with him, arguing that she will not debate with someone who’s views she finds so abhorrent. But in a film – a real story – that’s about people’s right to say what they believe to be true, a historian who refuses to share an argument with someone she disagrees with seems to be shutting the door on the very free speech she’s demanding for herself.

The difference, she would argue, is that what she said about Irving was true, whereas what he was saying about the Holocaust was not. For Lipstadt, freedom of speech goes only as far as the truth, and this film – and the court-case it portrays – sets out to explore whether this is the case and if so, who should determine the truth.

The subject, then, is fascinating to academics and intellectuals, if not to the wider public. And it gives rise to a film with a lot of talking. Lipstadt talking about her views. Irving talking about his views. Lawyers asking her to explain her views. Lawyers, so-called experts and judges discussing the relative merits of the conflicting views. In this sense, it feels more theatrical than cinematic, with the courtroom being the stage.

But – perhaps because of its admirable aim of trying to follow the facts – what was ostensibly a rivalry, a war-of-words between two academics (the film itself analyses whether it would be appropriate to replace the word “academics” with “historians”) becomes a battle between Tom Wilkinson’s barrister and Timothy Spall’s Irving, since the defence legal team opposed the idea of letting Lipstadt give evidence on her own behalf.

This turns the crux of the film into a battle as ferocious as any you are likely to see, with words being flung around like bullets, but not involving the woman at the heart of the story. As it happens, both Wilkinson and Spall are magnetic enough to make the courtroom scenes fizz, while Rachel Weisz, overlooked at the Oscars for her heart-crushing performance in The Light Between Oceans, is on less convincing form here, struggling with an American accent, a 1990s hairdo and a disappointingly passive protagonist.

At its best, the film examines the modus operandi one of the finest libel lawyers of his generation, Richard Rampton, from his research trip to a concentration camp, to his deportment in court, his interrogation of the evidence and those giving it and even his insistence on drinking red wine from a plastic cup. Similarly, it provides an enlightening behind-the-scenes look at the English civil courts and how the facts have to be put dispassionately aside to consider only legal arguments.

But the film was weaker, perhaps inevitably, when it tried to consider the more emotional moments, such as the desire of Holocaust-survivors to be heard at the trial, since the whole point of the legal argument was not to let the case be clouded by emotions.

In this sense, it was a tremendously interesting real-life story, but with a largely passive protagonist whose own position was often conflicted as her stubbornness threatened to derail her own case. The film was as much of an intellectual exercise, devoid of emotions, as the case itself.

While the film is overcomplicated by an overpopulation of minor characters whose identikit personalities are drowned out by the eloquence of the screenplay, it feels a little ill-focused, as it is ultimately reduced to a head-to-head between two fearless intellectuals – just not the one who would appear to be the subject of the film, the one who gives the news conference to discuss the implications of the result.

And given that this was a true story from recent history, it might have been useful, for viewers who didn’t already know the outcome of this trial, to have ended with captions, which can often be irritating or expositional, but here might have added context to the verdict.