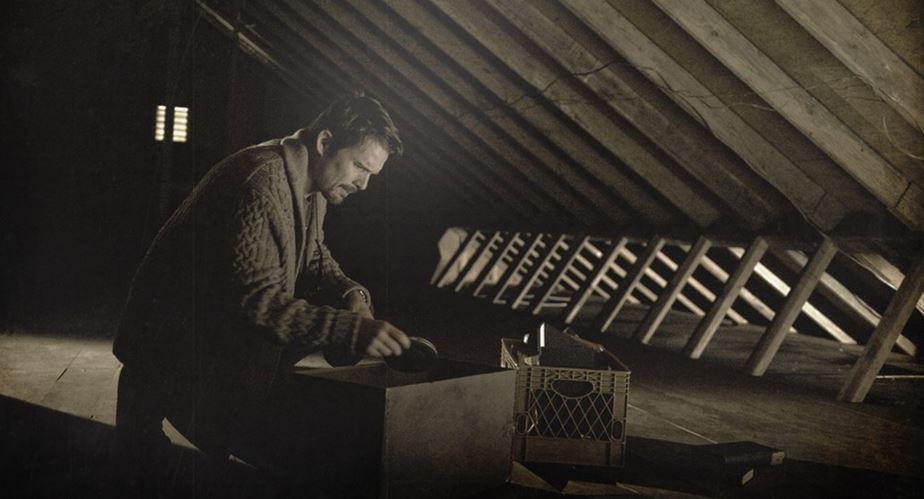 True-crime author Ellison (Ethan Hawke) moves his family to a new neighbourhood to write about a story that he hopes will help him regain the kind of acclaim he hasn’t had for his work for a decade.

He doesn’t tell his wife and children the details of his latest subject, which is probably just as well; the last family to live in their new house ended up hanged from the tree in the garden – apart from the youngest daughter, who disappeared, never to be seen again.

Up in the attic, Ellison finds an old projector and a box of old Super 8 films; each one depicts the gruesome killing of another family. When he starts to investigate each grisly murder, he discovers that in every case, a child has gone missing. He realises he’s onto the biggest story of his life.

But the further he digs into the story, the more things go bump in the night, until he’s forced to make a big decision for the safety of the family. Will he get to the bottom of the story before he becomes part of it?

Sinister certainly lives up to the name, but in that sense, the film could equally have been called Derivative or Clunky.

Sending a family to live in a house whose previous inhabitants have been brutally murdered is obviously going to put the protagonists in jeopardy. Having someone dig into the history of the crime is obviously going to turn up the kind of horrors no-one would want to encounter. Add in some found-footage and defensive locals and you have the recipe for a rather standard horror.

When a character walks into such a scenario, it’s difficult to feel sorry for him when things start to go wrong. As a viewer, you want to try to work out what the connection between the murders might be, but the film-makers sway between offering us real-life possibilities and blaming ghosts and demons. Is it going to turn out to be a thriller or a horror? One minute, Ethan Hawke is covering his walls with maps and photos, like a private detective – the next, he’s skyping experts in pagan deities. The audience can participate if it’s a who-dunnit, but when it’s ancient demons, it makes it harder for us to feel involved. A handful of red-herrings don’t help, only serving to irritate us, once we’ve realised we’ve tried to invest in something that turns out to be irrelevant. And part of the denouement turns out to have been signposted so far in advance that it’s almost insulting to find out it was part of the answer.

There’s no question that Sinister has its fair share of jumps and frights – but often, they come from sudden sound effects after moments of quiet or things jumping out of the shadows – which feels somewhat lazy in a narrative that, once the standard groundwork is laid, tries to do something a little different.