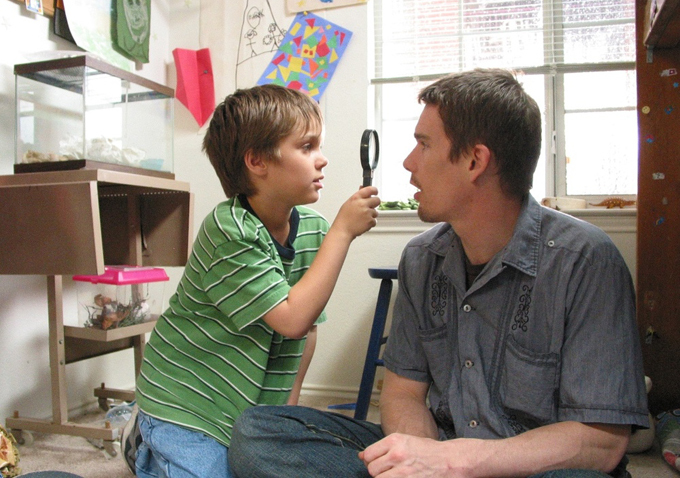 Six year old Mason (Ellar Coltrane) and his older sister Samantha (Lorelei Linklater) are coming to terms with the divorce of their parents.

Their mother (Patricia Arquette) and father (Ethan Hawke) make much better friends than wife and husband, and although the children live with their mum, they enjoy regular weekends with their dad.

Over the twelve years that follow, their mother goes through a succession of inappropriate boyfriends and husbands, while their father takes a while to grow up before he eventually settles down, trading in his youth – and his sports car – for adulthood, a stable family unit and people carrier.

In the meantime, we watch Mason and Samantha grow up into young adults, doing their best to navigate themselves through the problems that homelife, school, holiday jobs and college throw at them.

This is one of those films that deserves more praise for its process than its storytelling. It’s a gimmick, and not even an original one.

In January last year, one of the most prolific and inventive British film-makers, Michael Winterbottom, released Everyday, a film that had been shot over five years, to give a more authentic portrayal of its characters aging during the course of his story. In this case, Linklater, who clearly started his project first, brings a twelve year journey to fruition.

In some senses, this feels like a very well executed film-school exercise, and while it’s certainly an impressive feat to shepherd a cast through such a long adventure, persuading most of the key cast and supporting characters to reunite during the process to film stage after stage of the story, from a narrative point of view, the film’s main failing was that, well, there wasn’t really much of a story.

In a conventional film, we follow a protagonist as they chase a goal, trying to overcome obstacles in their path, but here, Mason’s only goal seems to be to get older – which, by the way, he does successfully; not wanting to give the end away, but pretty much the only thing we learn from Boyhood is that twelve years after boys are six years old, they’re eighteen years old.

Linklater – with the help of his frequent collaborator Ethan Hawke, Patricia Arquette, his own daughter Lorelei Linklater and the admirable Ellar Coltrane – gives us an honest portrayal of a central core of characters, following them as they grow – up, apart and together – but while the performances are admirable – how lucky for the director that six year old Coltrane grew up to be a perfectly respectable actor – we don’t particularly learn much about anything.

Anyone watching this 15 certificate film will be know what it’s like to grow up from the age of six and will have their own experiences to relate – many of which will be more interesting, exciting and dramatic than Mason’s boyhood. A couple of alcoholic stepdads over a twelve year period makes it feel a little more soap opera than cinema, although there’s precious little else going on.

That’s not to say that we need constant catastrophes to be engaged by a film – the performances are universally warm enough for us to care about these people and enjoy their company – but to spend nearly three hours watching someone else’s life, you feel you need to learn something by the end of it, or else you might as well just live your own.

The closest we come to any kind of message is that just being generally nice will ensure that your life won’t be generally too bad and if things aren’t always great, they’ll get better. It shouldn’t take a film-maker nearly three hours to tell us this.

Although it’s called Boyhood – and supposedly centred on Mason – for much of the film, it could equally have been called Girlhood, or indeed Parenthood (although that’s been used before), because many of the best moments involve Ethan Hawke’s character growing up and it’s the father-son scenes that feel the most profound.

With likable characters and evident passion from all those involved, Boyhood is an enjoyable enough journey, but it’s a journey to nowhere that could equally have ended at the age of sixteen and beaten Michael Winterbottom to the punch or waited another couple of years to see Mason collect a Pulitzer Prize.