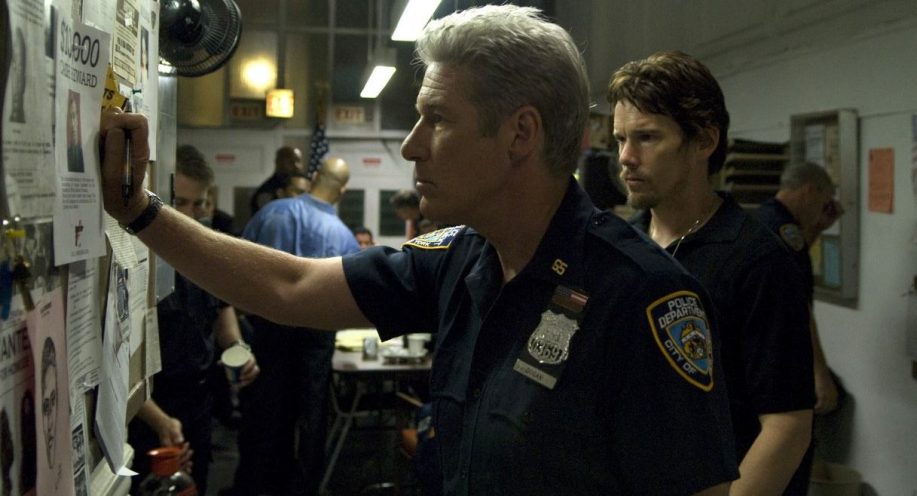 Eddie (Richard Gere) is a uniformed cop, on the verge of retirement. After all his years with the NYPD, he doesn’t seem to have a single friend – either in the force or outside work. His only pleasures seem to come from the time he spends with a local prostitute, Chantel (Shannon Kane).

Based at the same Brooklyn precinct, but not knowing Eddie, is drug squad detective Sal (Ethan Hawke) whose struggling to make ends meet, with his wife (Lili Taylor) pregnant yet again. Accepting bribes and selling confiscated drugs help to supplement his meagre, insufficient income.

As is the convention in such films, each cop’s life descends deeper towards inevitable doom.

The closer to retirement Eddie gets, the further away it seems, as he alienates one rookie after another with his alcoholic despair.

Tango is blackmailed by his handler (Ellen Barkin) to betray Caz, who’s become his closest friend.

And Sal gets himself involved so deeply in his desperate get-rich-quick schemes that he’s far dirtier than most of the gangsters Tango hangs around with.

The other convention of such films, of course, is that having set the protagonists on their downward spirals, they find themselves at the same location for a tragic denouement.

Oh – and the final convention of such films – the title, of course, is ironic.

This is a film that takes itself far too seriously. It thinks it’s important, when it’s little more than the kind of police procedural plotting we’ve seen done many times before, but far better.

We’ve seen disheartened aging cops on the verge of retirement – Lethal Weapon and Falling Down are the first two of many to come to mind.

Crooked cops, skimming the cream off the top of each raid, are no stranger to our screens – big or small – with the Shield’s Vic Mackey providing far more passion and complexity than we get here. And don’t forget director Antoine Fuqua’s own Training Day – rightfully highly regarded.

And the number of films about undercover cops infiltrating gangs are so numerous, counting them will be a useful technique for falling to sleep when you’ve run out of sheep.

Taking these three stock police plots and rolling them into one film, by having our protagonists end up in the same place at the same time is using an unoriginal method to tie together three unoriginal stories.

No matter how strong the performances – and they are universally effective – the characters themselves aren’t likeable enough for us to care about them.

The themes are too familiar, the largely unlinked storylines don’t particularly warrant elevation to the big screen, there are contrivances around every corner – and most disappointingly, not a single surprise.