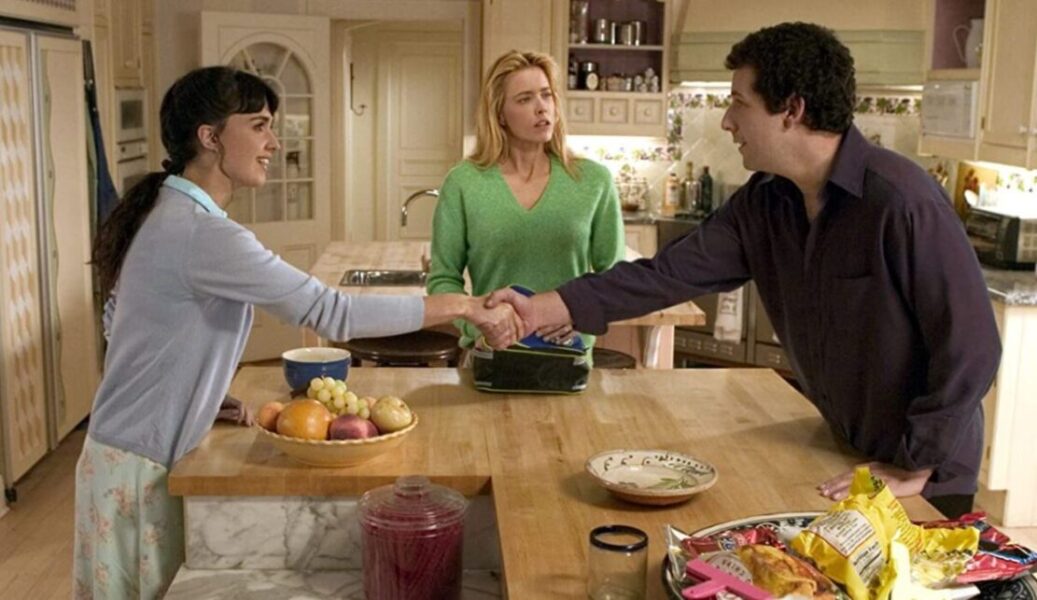 Hispanic single-mother Flor (Paz Vega) gets a job as maid to a wealthy LA chef John (Adam Sandler) and his materialistically shallow wife Deborah (Téa Leoni). No-one in the family speaks Spanish and she doesn’t speak a word of English.

When the family rents a beach house in Malibu, Flor is invited to join them, with her daughter, Cristina.

Deborah prefers pretty Cristina to her own, overweight daughter, and treats her to private days out and gets her a scholarship.

Flor doesn’t like her daughter becoming more comfortable with the Clasky family than with her, so she decides to quit.

Marital infidelity and forbidden attraction only add to the emotional mix.

This is one of those peculiar films where well-observed familial relationships, a large number of tender moments and all-round impressive performances don’t seem to amount to a satisfying end product.

The film doesn’t seem sure of its subject: is it about a marriage under pressure, a Hispanic maid trying to make it in the English-speaking world or as its rather incongruous framing structure would suggest, a Hispanic teenager applying for a scholarship to Princeton?

And the whole film is predicated on the unlikely notion that a wealthy family would hire a maid who didn’t speak the lingo in the first place.

But it challenges the viewer, providing you with a baddie who really has the best intentions and for a time, making you feel uncomfortable about rooting for the break-up of a marriage.

Ultimately, it leaves you with the same warm and uplifting feeling that Hollywood movies of this kind strive for.