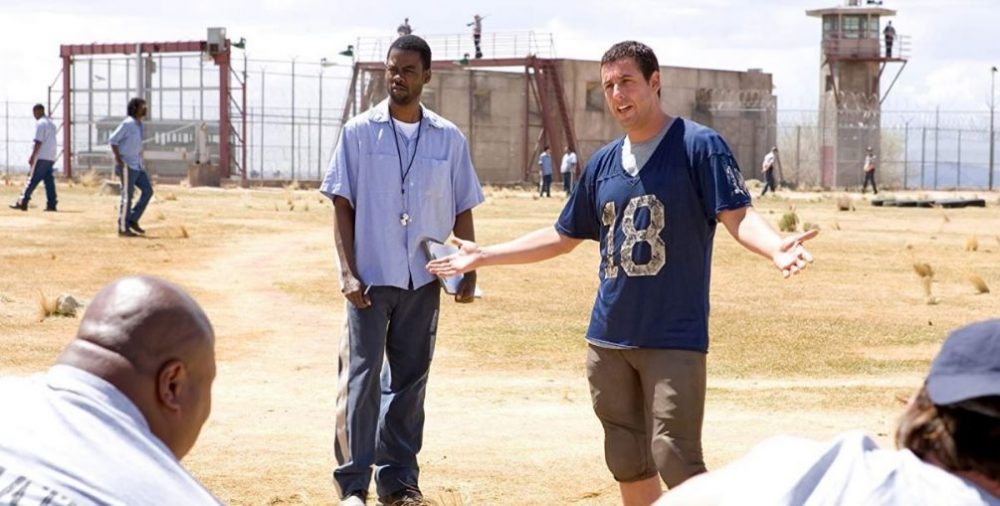 When fallen American football star Paul (Adam Sandler) is caught drink-driving, he’s jailed to make an example of him.

The ruthless prison warden (James Cromwell) tells him life inside will be easier if he trains the guards’ semi-pro football team.

Paul decides that the best he could do is to round-up some prisoners to give the guards a pre-season practice game.

Can fellow inmates Farrell (Chris Rock) and Nate (Burt Reynolds) help him turn a group of no-hopers into a world-beating team?

You might recognise the plot from Vinnie Jones’ Mean Machine, itself a remake of the 1974 film The Longest Yard, with Burt Reynolds as the lead!

This isn’t just derivative of them, but of every other prison movie and every sports film, with underdogs coming good and every stereotype under the sun: from the under-educated but muscle-bound black inmates to the gay convicts who drag-up to be the team’s cheer-leaders.

The film isn’t quite sure what it’s trying to be – sometimes, another bawdy Sandler comedy and other times, it masquerades as a dramatic study of self-discovery and rebirth — apparently taking itself rather too seriously.

It’s uninspiring and follows the particularly predictable path of its predecessor productions, but it’s harmless enough — and Chris Rock’s motormouth has plenty of opportunities to produce a few cheeky laughs.