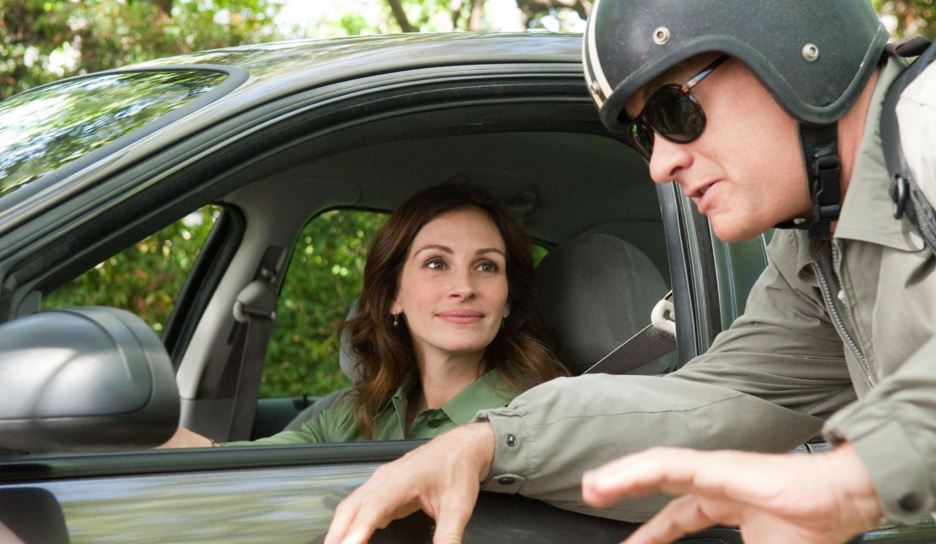 Pushing 50, shop-worker Larry Crowne (Tom Hanks) is laid off by a company that’s decided to invest only in staff with a college education. They’re thinking about the future, you see.

Stunned and unable to find another job, Larry decides to take their implicit advice and sign up for college.

Swapping his gas-guzzling 4×4 for a scooter he bought from his neighbour’s (Cedric the Entertainer) permanent yard sale, he turns up at college on his first day and is immediately befriended by fellow scooter-rider Talia (Gugu Mbatha-Raw) who invites him to join her gang.

As a team leader, communication was never a problem for Larry, but the course he decides to study is for a qualification in, well, pretty much talking out aloud.

His cantankerous professor in talking out aloud, Mercedes Tainot (Julia Roberts), is full of great advice, such as “address some of your points to the left and some to the right but address most to the middle.”

Pearls of wisdom like that are clearly going to get Larry and his teenaged classmates a long way.

Can teenaged Talia make middle-aged Larry feel young and cool enough to come out of his shell enough to give Mercedes the confidence she needs to become a better teacher again, which in turn would help Larry get the qualification he needs to address most of his points to the front, thereby finding a new job and the love of a good, married woman thrown into the bargain.

The idea of a middle-aged reject going to college to better himself and find love in the process doesn’t seem like too controversial a subject matter and with the Oscar-winning actors Tom Hanks and Julia Roberts performing a script written by Hanks and the Oscar-nominated Nia (My Big Fat Greek Wedding) Vardalos, you’d think they couldn’t really go wrong.

But all the right ingredients for an uplifting, summer rom-com are thrown together so cack-handedly that they become offensive to endure.

Cheery Larry takes redundancy far too well. Why on earth would teenaged Talia invite him to join her scooter-gang at their first meeting? Why should we be rooting for miserable Mercedes to be unfaithful? It’s not like looking at photos of women in bikinis would be grounds for divorce. What does she see in loser Larry anyway? What makes her think she’s so special herself? A professor in addressing most of your points to the front? Really? In a film which is ostensibly about the importance of education, it’s odd that we’re meant to praise one perfectly bright student for giving up just before her final exams.

It’s all corny, unbelievable, unfunny, illogical, often even immoral. Tom Hanks is likeable, of course – but likeable is what he does? What Julia Roberts does is give a big laugh, but funny things have to happen to warrant a laugh of any size.

A running joke involving George Takei as another lecturer is one of the most effective gags – not because it’s clever, but because it’s realistic and unobjectionable.

Larry’s is one of the least dangerous mid-life crises ever portrayed on film – when the prospect of an affair with a gorgeous flirtatious black teenager is thrust in his face, he prefers the safety of his cantankerous, middle-aged white teacher.

The film’s title – the lead character’s name – is one of many examples of how unimaginative that is. Naming a film after a fictitious protagonist often feels like a cop-out and here it certainly doesn’t inspire confidence.

The film is certainly undemanding and if you’re not worried about plot or purpose, this could be seen as a bright and bubbly piece of upbeat confection, but an audience of middle-aged people who can’t be bothered to think is a small audience.

When you’re as big as Tom Hanks, you can do what you like. But normally, what big stars like is slightly edgy or different, but there is so little to this film, it’s almost impossible to work out why he would’ve been so enamoured by this project that everything else in his life would be put on the backburner to bring this dream to the big screen.

Unlike last week’s Loves Kitchen, which failed equally, this is more watchable, but it warrants fiercer criticism, because those involved should simply know better than to produce something so tame and lame.

Hanks should stick to the front of the camera and Roberts should pick her films based on a decent script, rather than just working with her mates.