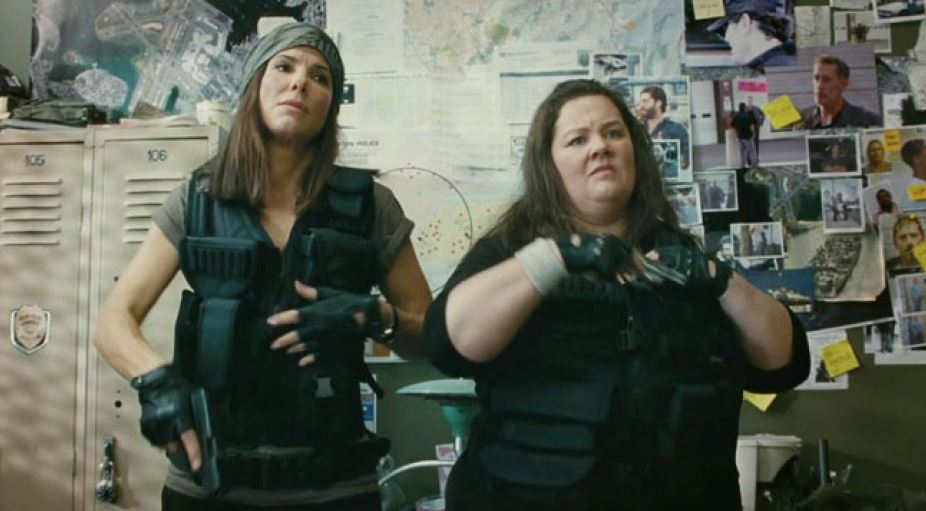 Ambitious FBI Agent Ashburn (Sandra Bullock) has fallen out of favour with her boss and none of her colleagues like her strident, supercilious self-confidence. When the FBI gets a tip off about an unknown drug kingpin in Boston, she’s sent to investigate – to get her out of her boss’s way but also to give her a chance to prove herself.

The mismatched pair are forced to work together to hunt and bring down a ruthless drug lord, who’s always been one step ahead of the authorities.

This film is being hailed as revolutionary – the first female buddy cop movie. Cagney and Lacey was certainly ground-breaking in its day, but it’s taken thirty years for a comparable pairing to make it to the big screen.

Having said that, a film can’t live or die on its politics – but given that it’s a comedy, and a funny one at that, most people who go to see it won’t be doing so for political reasons. They’ll be attracted by old-time comedy queen Sandra Bullock and the rising star Melissa McCarthy, who rose to public prominence in another female-dominated comedy by the same male director, Paul Feig; Bridesmaids even won her an Oscar nomination.

This is not a film where much plot is required, which is just as well, as it’s about as by-the-book as a police procedural can get. It’s all about the relationship between its two leads – initially frosty, but of course warming up as they realise that their differences can actually help their investigation, rather than hinder it.

There are moments where the femininity of the characters is used to good effect, but at other times, it’s just accepted and almost ignored. McCarthy’s brusque demeanour is particularly entertaining, as she employs similar bravado, but on the other side of the law, to her previous outing in Identity Thief.

The Heat does push the patience from time to time, though, not least a bonding session in the bar, which sees the pair dancing to cheesy music and playing drinking games that involve taping their noses to their foreheads. It felt like the compulsory musical interlude that Julia Roberts used to have in many of her earlier movies, which involved her trying on clothes. This scene wasn’t funny and undid a lot of the good work, both from a comic and political point of view.

The film is perfectly adequate and unquestionably entertaining, but it’s not particularly clever or mentally engaging and it’s certainly not as ground-breaking as one might think, and while it’s already spawning a sequel, it’s unlikely to lead to a sudden stream of female-led films. The Heat is driven by two actresses with clout – audiences will be attracted to them, rather than concept.

One of the unexpected joys of this film is to find out, for the first time in nearly three decades, what Back to the Future’s Biff is up to these days. It’s brief, but it’s fun.