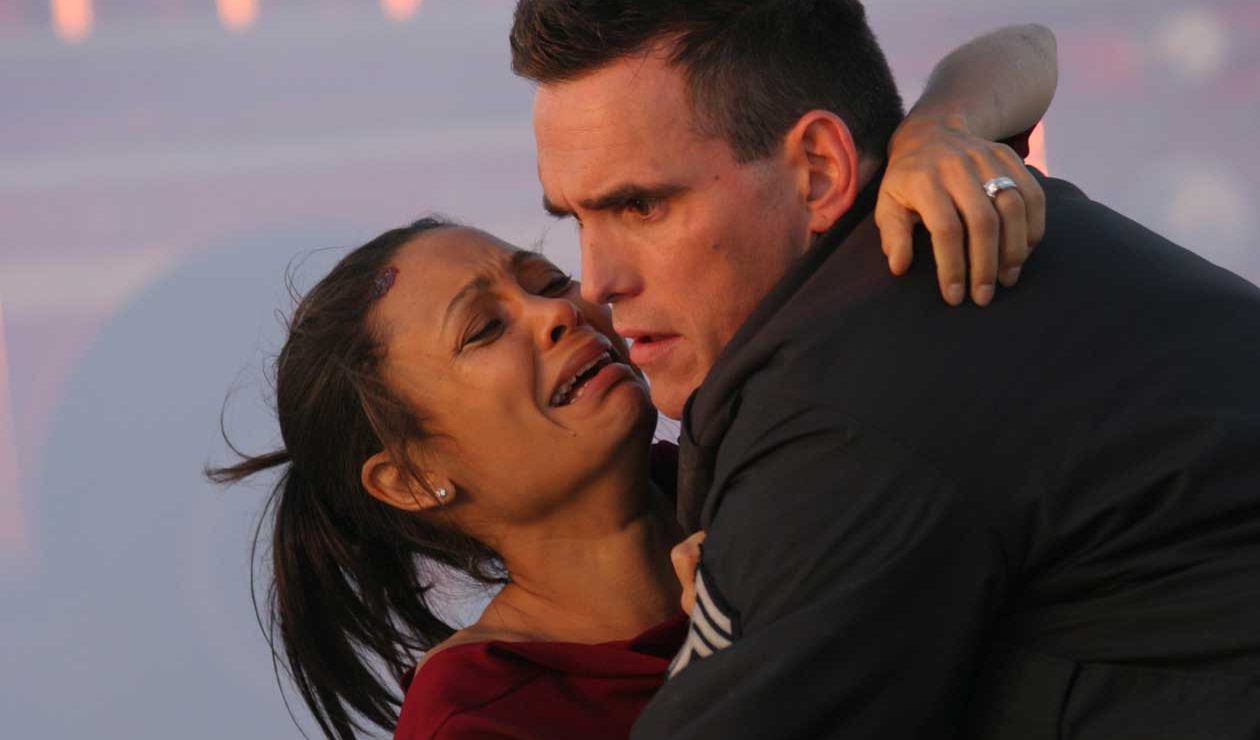 The writer of Million Dollar Baby turns his attention to the racial tensions, bursting to the surface, between a disparate group of people in LA.

The (white) District Attorney (Brendan Fraser) has a tough decision to make when two black youths steal his car. If he’s tough on them, the liberals will accuse him of victimisation. If he’s not, hardliners will accuse him of going easy on them. Neither option looks appealing in the run-up to an election.

Meanwhile, a racist cop (Matt Dillon) stops a black TV producer in a similar car, and assaults his wife. The assault alienates his good-cop partner (Ryan Phillippe), whose attempts to change partner see him fall foul of the black captain.

Then there’s the Iranian shop-keeper who falls out with the white owner of a gun-shop, who thinks he’s an Arab, before seeking vengeance on a Latino locksmith who fails to protect his shop.

Then there’s the black detective (Don Cheadle) and his Latina cop girlfriend (Jennifer Esposito), whose investigation springs from a car crash that turns out – in one way or another – to link most of the other characters in the film.

All in all, the film serves to show us that racism exists throughout society – not just between white people and the ethnic minorities – and that there are no simple answers.

It’s an intelligent film, making us challenge our own prejudices, pointing out many of the pitfalls of political correctness and the paranoia it creates.

The white woman who feels guilty about shunning to black men she sees on the street, lest she be branded racist, then gets robbed by them. (Just because you’re paranoid, it doesn’t mean they’re not out to get you!) The black cop who tells his mother he’s sleeping with a white girl, as he knows it’ll upset her more than if he says he’s sleeping with a Mexican, which in itself inadvertently offends his girlfriend, because her parents are from Puerto Rico and El Salvador. There’s the Iranian who thinks everyone is out to get him because they think he’s an Arab, and so linked to terrorism. Then there’s the black police chief who’s unwilling to take action against the racist cop, because it was hard for him to reach that position in the force and he doesn’t want to stir.

Tackling racism from every angle, it seems to be saying “racism is bad, but affirmative action isn’t the right way to fix it.” It draws attention to a lot of issues and highlights a lot of problems, but it doesn’t offer any answers – perhaps that’s the point – maybe there are none.

But while it raises some interesting ideas, the mechanisms used to do this are flawed. The structure – interweaving stories of apparently disparate people – seems more contrived than in previous outings, as made popular in the films of Robert Altman, for example. Here, the stories are linked by coincidences so many and so huge that they stretch your suspension of disbelief to the extent that the film is enjoyed best as a fairytale.

And too much of the plot is just too “Hollywood” convenient – a cop who wants a transfer from his racist partner manages to negotiate his way through the bureaucracy of the LAPD to find himself in a new car later the same morning – and wouldn’t you know it, the racist cop finds himself having to save the life of the very women he assaulted only hours earlier – then the good cop finds himself picking up a hitchhiker, who we know is a fleeing car thief, who the night before stole the DA’s car, accidentally ran over the husband of a woman who’d later be involved in an accident with the black detective, who in another storyline, is searching for his no-good loser of a brother, who turns out to be a…well…I won’t spoil it for you, but it won’t come as a great surprise. And the increasingly improbable links don’t end there.

In the hands of Paul Haggis, this all makes for a powerful, thought-provoking drama, but one that has to be taken with more than a barrel of salt.

While the cast is undoubtedly exemplary, without exception, and the script is brimming with provocative, bravely politically incorrect dialogue and ideas, one of the biggest problems is that with so many interweaving storylines, the plotting becomes naively messy. Another result of that is that many of the big cast have too little to do. You feel it could’ve done with fewer characters, fewer storylines, fewer coincidences and a little less misery.

It’s undoubtedly clever, but not half as clever as it thinks it is.