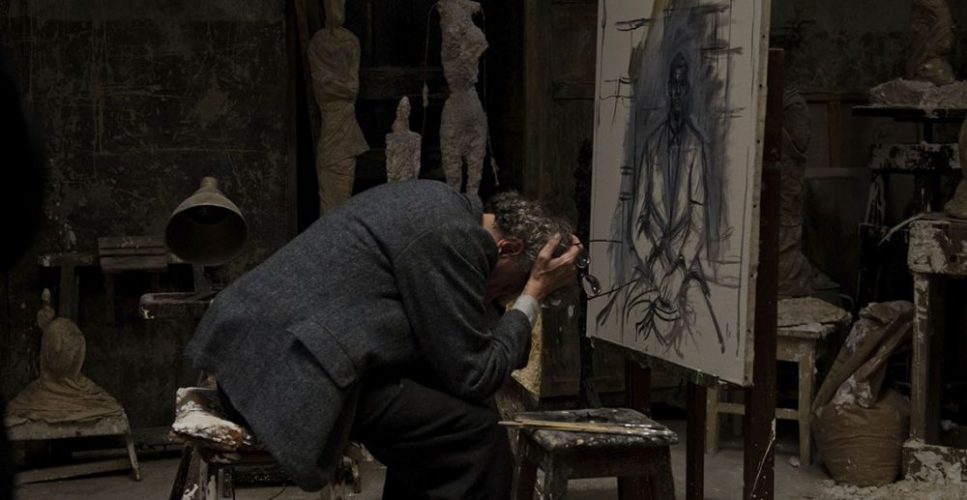 The American art critic James Lord (Armie Hammer) has been in Paris for some time – among other things, working on a biography of the Swiss-born artist Alberto Giacometti (Geoffrey Rush).

Perhaps most famous for his wiry but lumpy sculptures of the human form, Giacometti also painted portraits, and having become friendly with James over the course of their interviews, he decides he wants to paint his portrait.

By 1964, James has decided that he’s ready to leave Paris and he has a flight home to New York booked the following week, but Giacometti assures him it will take only a few hours, two days at most, so he agrees.

But Giacometti is a rather frustrating combination of a cantankerous, aging artist with self-doubt, who gets as little satisfaction in his home-life as he does from his work and believes that no portrait can ever be finished, so his two day estimate turns out to be wildly optimistic.

James seems to spend as much time calling the airline to postpone his flight as he does sitting for the painting or walking in the local cemetery with the artist to discuss his process…and encourage it along.

There’s much to enjoy in this clearly passionate portrayal of one of the Twentieth Century’s most idiosyncratic artists, from the contrasting performances of the grumpy old man and his bright and reverential subject to the production design of the grey studio from which so many iconic images emerged and the studied detail of the artist’s process.

But more than anything, that’s what this is – a study of the artistic process rather than a film in the true sense. Perhaps befitting a biopic of an artist – based on the memoirs of a critic – it’s more of a piece of art, or a critique of a piece of art – than it is a piece of cinema.

There’s little tension or character development – the characterisation is lightly humorous but feels familiar – and no drama; at the outset, Giacometti announces that he doesn’t believe portraits can ever be finished – so it shouldn’t have come as any surprise to anyone, least of all his own biographer, that it takes more than a couple of days to produce anything worthwhile.

Sylvie Testud as the artist’s long-suffering wife and Clémence Poésy as the beautiful young prostitute that he loves to paint – and kiss – provide both Giacometti – and us, the viewers – with a distraction from the canvas.

And Armie Hammer’s wide-eyed, hopelessly trusting and endlessly supportive critic has a delightfully gentle comic touch as he sits – and sits – and sits. Geoffrey Rush is a little harder to make out, alternating being a spoilt and miserable misanthrope at his easel and an avuncular genius while out and about.

But while it’s fascinating to watch the detail of how he builds – and destroys – his portrait, the endless close-ups of Giacometti’s brushes being transferred from paint-pot to canvas, while James looks on, waiting hopefully, is only one step short of watching paint-dry. James is the viewer’s way into the story – our eyes and ears – and what he experiences just isn’t that interesting – so the same goes for us, however well made.

Rush’s Giacometti seems to prefer sculpture to painting, often jumping up from his easel and massaging his clay figures, as if to relax, making you wonder why he even bothers with painting – and this portrait, and indeed his overall oeuvre, isn’t particularly put into context.

It’s a beautifully played chamber piece, a labour of love from a director who clearly loves art but – while it’s illustrative of James Lord’s frustrating experience – it’s narratively slow, repetitive and as dull as the hues of the artist’s palette.