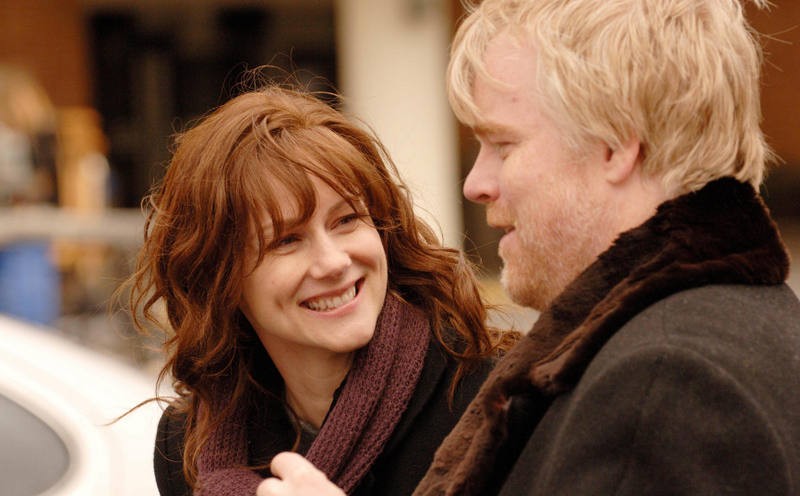 Lenny Savage (Philip Bosco) is elderly and infirm. He lives in Florida with his equally elderly and infirm girlfriend Doris (Rosemary Murphy). She’s now bedridden and being cared for by a male nurse who doesn’t much care for the cantankerous old Lenny, and their relationship isn’t helped by Lenny’s clearly oncoming dementia.

When Doris dies, Lenny’s estranged grown-up children Wendy (Laura Linney) and Jon (Philip Seymour Hoffman) fly out from their respective corners of the US to support him at the funeral. They arrive to the surprising news that Doris’ kids won’t let Lenny stay in the house where the couple had lived for years.

Wendy and Jon’s lives are turned upside down as they are forced to take responsibility for their father, finding him a room in a care home near Jon’s house in the icy-cold north.

This is a strong drama, dealing with the kind of strained family relationships that many viewers will find uncomfortably familiar – within and across the generations.

These are not happy characters even at the start of the film, so the tensions they’re put under from all sides cannot bring contentment, but the writer/director Tamara Jenkins manages to wring much dark and self-deprecating humour from the situation.

Laura Linney thoroughly deserves her latest Oscar nomination for this role, and the only reason that Philip Seymour Hoffman won’t have got a nod here is that he’s being honoured for Charlie Wilson’s War instead, this year.

Linney isn’t a stranger to playing siblings – her first Oscar nomination came for playing Mark Ruffalo’s sister in You Can Count On Me – and now, as then, the relationship is completely believable.

As a drama like this requires, whether she’s alone or interacting with the rest of the cast, you can practically read every last emotion on her face.

In stark contrast to his Charlie Wilson’s War performance, Hoffman is very understated here – for much of the film – he’s strapped to the wall for a back-problem – yet he, like Linney, remains one of the most vibrant actors working today.

As they struggle to shed their inherent selfishness and insecurities to make the best of an uncomfortable situation, the siblings grow together and apart and together again, as you would expect from any such drama.

Cinematically, the film is simplistic, allowing the characters to build and carry the story along, without visuals getting in the way, but there are a number of quirky or clever touches which add to the satisfaction.

The story itself is rather simplistic – brother and sister put infirm father in a care home when his girlfriend dies – but it’s told with such skill and warmth that there’s not a dull moment.

It’s a masterpiece in acting, with some masterly writing and directing touches, but it’s a film without too much ambition. It would work equally well, if not better, on stage.