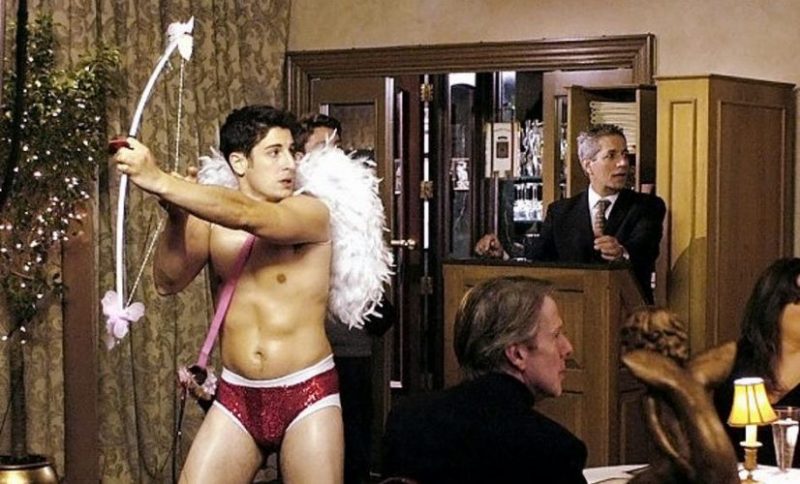 Anderson’s (Jason Biggs) proposal to Vanessa (Audra Blaser) doesn’t quite go to plan: she drops dead in the restaurant, from shock. Not your typical opener for a romantic comedy.

Understandably, it’s a while before Anderson gets over this tragedy. In an attempt to help him, his best mate dares him to be bold and one day, in a diner, he throws caution to the wind, and when waitress Katie (Isla Fisher) asks him what he wants, he asks her to marry him.

Despite the fact that this is the first time they’ve met, she accepts – of course – there wouldn’t be a film otherwise.

Her acceptance of the proposal is largely down to her desperation to escape the weirdo who’d asked her to marry her only the previous night.

Rarely does a romantic comedy come along that is so poor that it will scratch at anything in its desperation for laughs.

Every last one of the grotesque supporting characters – from Katie’s stoner best friends, her in-denial gay ex-boyfriend and her parents – the prim and proper spoilt mother and jailbird father (Joe Pantoliano) – to Anderson’s unlikely nymphomaniac Mum and Dad – is so removed from reality that even in the context of this ridiculous set-up, they feel out of place.

It’s as if each of these characters exists only to squeeze out the one poor joke that’s written for them. Most don’t work on any level.

You simply won’t believe any of the characters or preposterous situations, so you simply won’t care about anyone or anything that’s presented to you. You’ll probably resent having to sit through it.

You might be unfortunate enough to catch yourself laughing – slightly – from time to time, but you’ll hate yourself for it – and not in a fun way.

Much of the humour is in the vein of American Pie, but without any of the charm, wit or originality. To a great extent, it’s about Jason Biggs reliving those days, doing the same kind of eight year old gags – but worse.

Biggs and Fisher try desperately to be cute and charming, but the material they have to work with is so overwhelmingly poor that they can’t rise above it.

The film is an embarrassing, pointless and sad waste of two leading actors who could do – and have done – much better.