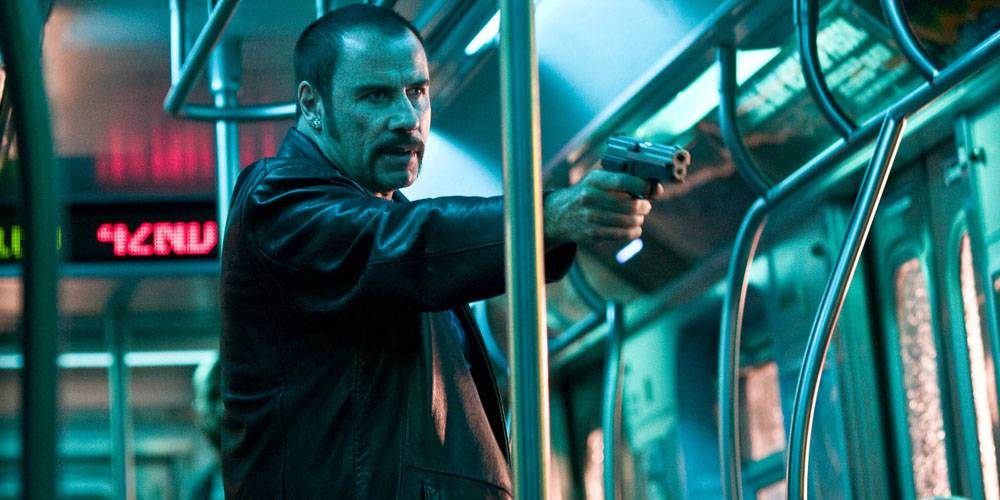 New York Subway worker Walter (Denzel Washington) has spent years working his way up the ladder and reached a managerial role, but allegations against him have seen him bumped back down to work on the despatch desk, saying things like “You’re clear to go, Pelham 123.”

Not the kind of exciting existence he might once have hoped for – but he certainly wasn’t ever looking for anything as exciting as happened on this fateful day, as luck would have it, moments before the end of his shift.

One of his trains, the Pelham 123 service, doesn’t seem to be behaving itself – and when he checks in with the driver, it becomes clear why. The driver is no longer in control. The train has been hijacked by a gang, demanding ten million dollars within an hour – with the added threat that a passenger will be killed for each minute that the money is late.

The gang is led by the Ryder (John Travolta) – as bitter and twisted as he is ruthlessly determined – and includes former transit employee Phil (Luis Guzmán).

Throw in the smarmy, self-important hostage negotiator (John Turturro), the cuddly New York City mayor (James Gandolfini), a car chases and lots of guns and you have all the ingredients you need for a big-budget Manhattan thriller.

Hang on – did I say car chase? In a film about the hijacking of a subway train? Of course! How else are they going to get the money from the bank to the station, through Manhattan’s clogged streets?!

OK, so this is what happens when you let Tony (Top Gun, The Last Boy Scout, True Romance, Man on Fire etc) Scott remake a classic 1974 thriller.

The subtlety and quietly building tension of the original is blown out of the water by Scott’s blistering style, which isn’t a criticism – simply a stylistic contrast – and in fairness, what would be the point of remaking a film the same way as the original, Gus?

But this film feels like it should be a battle of wits between two wordsmiths, but despite the added touch of the failed attempt of the authorities to take over the negotiations, the dialogue isn’t clever enough – the words don’t do anything like as much damage as the bullets.

There are some nice touches that bring the film up to date – such as the teenager skyping his girlfriend as the hijacking begins (can you get a signal down there?) – but we don’t really get to known enough about the hostages to see them as anything more than film fodder.

It’s not comparisons with the original that tweak your conscience – rather echoes of a whole range of other films, such as Die Hard With a Vengeance or Speed. And when you follow some years behind such films, you have to offer something different – and Tony Scott basically takes a thirty five year old story and wraps it around some tricks, stunts and wild camera moves and edits we’ve seen in more recent films.

There’s nothing particularly wrong with this film as a thriller – it just doesn’t stand out as anything original – offering us exactly what we’d expect from a Manhattan-set thriller by Tony Scott.