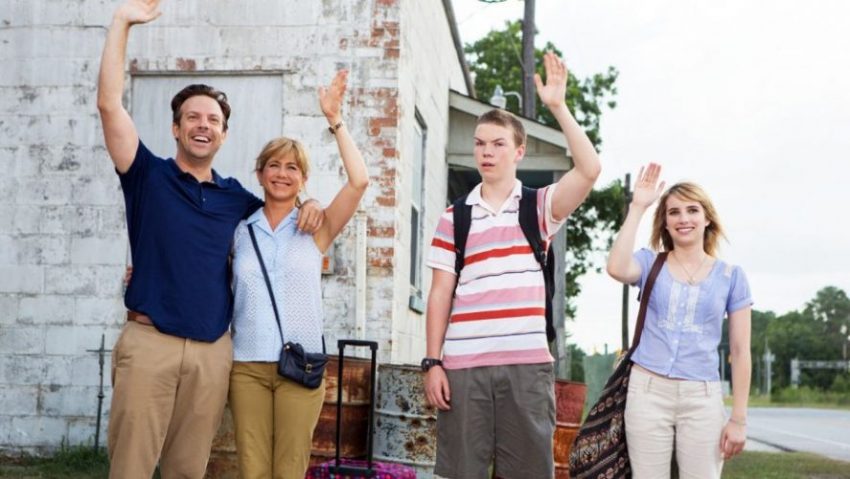 Small-time drug dealer David (Jason Sudeikis) loses everything when he’s mugged – including his stash and all his savings. He owes his supplier Brad (Ed Helms) thousands of dollars and has no way of paying him back.

The slimey drug lord offers him a way out; pick up a “smidge” of marijuana from a supplier in Mexico and drive it across the border, and not only will the debt be wiped clean, he’ll even get a pay cheque on top.

David decides that the only way he could ever get away with this would be to look less suspicious – the authorities would never stop a family on holiday in their motor-home, surely?

He persuades his cantankerous stripper neighbour Rose (Jennifer Aniston) to pose as his wife, while abandoned teenager Kenny (Will Poulter) and teen runaway Casey (Emma Roberts) agree to pretend to be their children.

Picking up the drugs goes somewhat more easily than the expected for “the Millers” – it’s the journey home that proves to be more problematic.

In many ways, We’re The Millers, is a very formulaic road-trip comedy, but it manages to rise above most in its genre, through a well-structured script, tight direction, sharp gags and effective performances – from the leads, to the supporting characters.

Despite it being a broad comedy, with jokes and situations that push at boundaries of taste, Jennifer Aniston and Emma Roberts deliver particularly complex turns, matching comedy for drama, as these hardened, cold-hearted and unloved characters learn to love being part of a family – but can’t bring themselves to admit it.

Will Poulter – the rising British star of Son of Rambow and Wild Bill – feels just a little out of his depth, but will have done enough to lay the groundwork for a stateside career.

Jason Sudeikis, at the centre of the film, is as likeable as ever, even though he’s playing a drug dealer, and that’s where the film is interesting – despite being so clearly amoral, with a group of losers, living on the edge by most accounts, lying to try to smuggle large quantities of drugs across the border, the audience will still be rooting for them.

This is not award-winning film-making, but it’s as skillful as you can expect for a cheeky, action comedy – undemanding, efficient and enjoyable.

For many people, We’re The Millers will also put an end to the phrase “You never see Jason Sudeikis and Ed Helms in the same room at the same time.” There are websites devoted to highlighting how similar they look, but confusing as it is for some, seeing them face-off against each other goes at least some way to proving they are, in fact, two people. The camera never lies, right? Not in Hollywood.