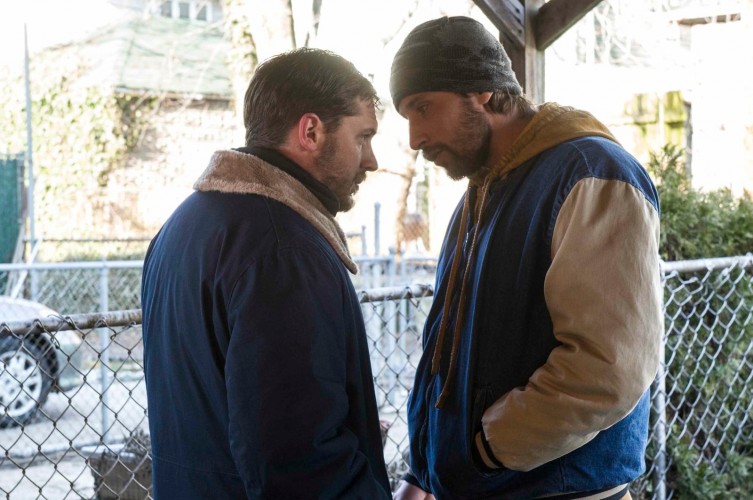 Marv (James Gandolfini) used to be something. He used to be feared. Now he just runs a New York bar that’s been taken over by Chechen gangsters. His younger cousin Bob (Tom Hardy) works for him, tending bar.

The bar is one of several across town used by criminals to hide their money from the authorities – and from rivals – until the heat has died down. They’re called “drop bars.”

As Marv and Bob are closing up one night, a pair of hoodlums raid the bar and steal the takings from the till, without realising the true potential of their target. Even so, the cash belonged to the Chechens and their boss (Michael Aronov) is not happy.

The mafia underworld is all about the honour of thieves and the robbery causes tension between Marv and his cousin, when Bob co-operates a little too closely with the police inquiry.

But when connections between the characters start to emerge and their motives become clearer, they all fall deeper into Brooklyn’s underbelly.

Coming from the pen of Dennis Lehane, the American writer behind Mystic River, Gone Baby Gone and Shutter Island, directed by the Oscar nominated Belgian director Michaël Roskam and starring the mighty Tom Hardy and the late James Gandolfini, in his final role, The Drop comes with high expectations.

Set in the middle of a snowy winter, it certainly conveys the gloomy atmosphere of the gritty and grimy New York underworld and Hardy’s brooding central character is a powerful presence, complete with impressive American accent. Matthias Schoenaerts, too, has an unexpectedly persuasive American accent for a non-native English speaker, although he – like Noomi Rapace – aren’t given the kind of complex characters that previous films have allowed them to show off their undoubted skills. Gandolfini is effective as a fading figure, desperate to regain the status he once had.

The contrived way in which Bob, Nadia, Eric and the dog are linked is as frustrating as it is unnecessary for the true plot to unfold. Marv’s character arc is the most believable, but the film places Bob at its heart and casts Eric as his main antagonist, which – without giving anything away – makes the denouement feel tremendously forced, almost to the extent that you feel you’ve wasted your time trying to engage in the narrative. Having John Ortiz’s detective turning up at opportune moments with just enough information to nudge the plot along also feels somewhat arch.

The plot is nothing like as deep and certainly not as convincing as they clearly think it is, which means that apart from appropriate cinematography and the odd acting flourish, a team with so much promise, making a crime drama about a money drop have instead disappointingly dropped the ball.