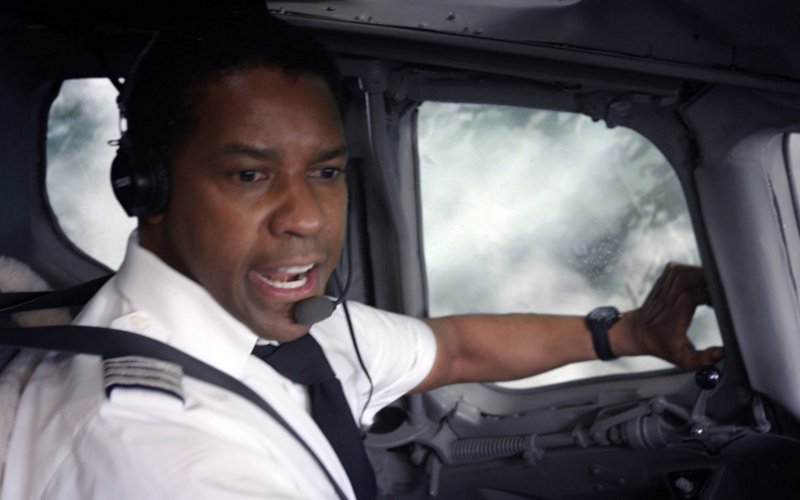 Whip Whitaker (Denzel Washington) is an alcoholic. He’s not ashamed of it and has no wish to be dry. He’s also dependent on cocaine – largely to lift him back up when the alcohol has put him down.

Oh, and he’s also an airline pilot – the captain of a commercial passenger service.

One day, he frightens his new co-pilot, Ken (Brian Geraghty), with a frightening but skillful manoeuvre to avoid severe turblence. Ken is convinced Whip is under the influence, but he can clearly do the business, so he says nothing.

As the flight is approaching its destination, the plane is thrown into a dive. Engines burst into flames. Certain death awaits all 102 people on board. But thanks to another audacious and unprecedented move from Whip, the plane crash lands in a field with the loss of only 6 lives; one is the air stewardess he’s been seeing – and partying with – outside work.

Initially hailed a hero, things start turning against Whip when the blood toxicity reports reveal that he’d been under the influence of both alcohol and cocaine at the time of the crash. He saved 96 lives despite this – perhaps even because of this – but it’s illegal, regardless.

His union leader (Bruce Greenwood), lawyer (Don Cheadle) and drug supplier (John Goodman) are all that stand between this alcoholic, drug addicted life-saving hero and a life sentence for manslaughter.

The film begins with the eponymous flight – a heart-in-the-mouth ride that will put you off flying for some time – or at the very least will make you wish to have a pilot like Whip Whitaker at the controls.

And that’s the nub of this film – if a pilot is so skilled that he unquestionably increases your chances of survival in an accident, does it really matter what makes him tick?

While the film-makers don’t suggest that this is a lifestyle that should be embraced, they don’t judge the protagonist. This is how he is. In that sense, Flight is descriptive, not prescriptive. While the film doesn’t judge him – at first at least – there are plenty of supporting characters to do this.

For much of the film, it’s fun to follow Denzel Washington as a loveable rogue – he’s clearly irresponsible, but supremely skilled, charming and self-confident.

Flight could’ve been deliciously cheeky and uncharacteristically immoral, but it ended up conforming – giving the protagonist more of a traditional character arc – but consequently, a more boring one. We didn’t really need to spend more than two hours watching a film to reach the conclusion that drink is bad.

Rather than being dangerous like its main character, Flight plays it safe.

And perhaps its weakest points are its attempts to bring some warmth into the film by showing he has a heart. We have a lengthy, side story about how he takes pity on an attractive young drug addict, Nicole (Kelly Reilly). He struggles to connect with his estranged son. And he suffers pangs of guilt when his girlfriend’s reputation comes under threat.

Flight is a film about addiction. Thanks to Denzel Washington’s Oscar-nominated performance, it’s a powerful study of the depths to which addicts can fall. But it’s also a predictable tale that tells us nothing we don’t already know and chickens out of delivering the controversial anti-Hollywood conclusion that some people can operate better on a cocktail of drink and drugs.