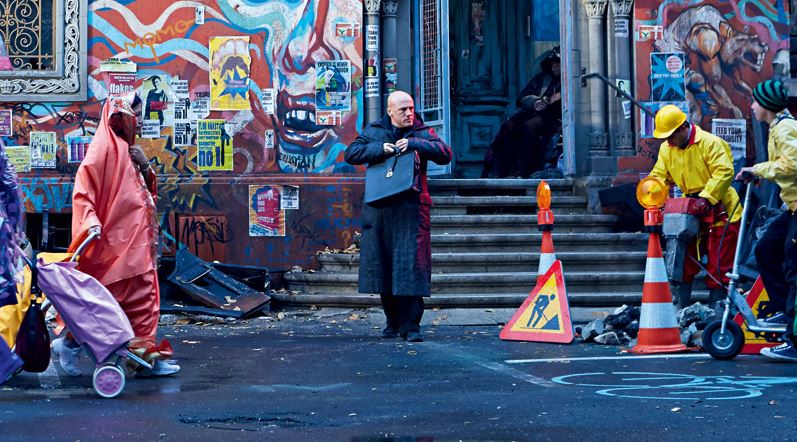 In the not too distant future, Qohen (Christoph Waltz) is a lonely data inputter for a major corporation, who leaves his cavernous former church of a home only to go to an office that resembles a games arcade.

Under the watchful eye of his supervisor Joby (David Thewlis), Qohen beavers away at one apparent computer game after another until the big boss (Matt Damon) decides to set him the task of solving the mysterious Zero Theorem, which seems to be designed to prove the hypothesis that nothing is everything – or some such thing.

In order to work on this project, the misanthropic geek manages to persuade the bosses to let him work from home, so as not to miss a phone-call that he believes will explain to him the purpose of life.

But as he works – and waits – there’s no sign of the call. He’s even assured by minions sent to help him – including the boss’s son (Lucas Hedges) and a mysterious sex-siren (Mélanie Thierry) – that proving the theorem will result in the call arriving.

Feeling overcome by the challenge, Qohen begins to question the whole mission – why should anyone even want to prove that everything equals nothing? And without the call, will he ever work out what he’s even doing there?

As someone who’s been a huge Terry Gilliam fan since the days of Monty Python and whose all-time favourite films include Time Bandits and Brazil, it breaks my heart to report that the Zero Theorem is a humiliating mess.

It looks like a Terry Gilliam film – but only in so far as it also looks like The Fifth Element, Blade Runner and there’s some Minority Report in there too – but the narrative and the characterisation are as random and unfocused as the animations he used to do for Monty Python, which worked for a minute, but not for more than 100 minutes.

It’s never quite clear what Qohen is doing or why – so the imposition of a new project feels arch. What is resting on his endeavours? We’re never quite clear why someone who’s apparently so bright is hanging everything on a phone-call that might never come. What is everyone else doing in this world? We don’t get a sense of this being any kind of future we might recognise – there’s a bit more graffiti and everyone drives around in Renault Twizies. This world is cleaner, brighter and quite a lot duller than the world Gilliam created in Brazil.

Virtual sex suits and singing pizza boxes paint an even more confusing picture of the world we never quite get to understand.

Neither do the supporting characters, who all fail to feel at all believable – with people just popping out of the woodwork for no particular discernable reason. While cute and charming enough, the presence of Mélanie Thierry’s sexy sidekick seems completely out of place. Qohen’s supervisor is enjoyable enough, but the one gag – that he keeps calling the protagonist Quinn, despite constantly being corrected – falls very flat very quickly. An almost unrecognisable turn by Tilda Swinton has his therapist is more irritating than entertaining.

Even Christoph Waltz himself – so watchable in his Oscar-winning turns for Quentin Tarantino – is struggling to make sense, as much of the script as of his character’s existence. He has none of the everyman empathy bestowed upon Brazil’s Jonathan Pryce, so we don’t really care whether he’s going to get a new high score on his latest computer game – or whatever it is he’s meant to be doing. Neither do we really care whether he gets the call – not least because we know that if that’s what he’s been waiting his whole life for, once it arrives, there’ll be nothing left to live for.

Only Matt Damon, as “the management” is entertainingly introduced and appears to have anything useful to say about what Gilliam is trying to say. It seems that after an hour and a half, the idiosyncratic auteur is trying to tell us that faith leads to a wasted life – too many people who have faith waste their lives waiting for a revelation that will never arrive. It’s a message that many will agree with, but it’s not clearly delivered by this film, except in an expositional monologue that we have to wait for almost as long as Qohen is waiting for his call.

Now we can all go on waiting for the film which we’ve all be waiting for – let’s hope it’s not too long before Gilliam finally gets his Don Quixote project off the ground. Again.