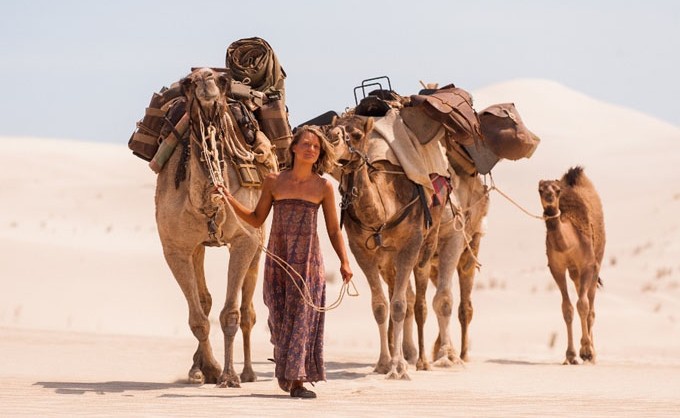 After a somewhat unhappy childhood and a rather unsatisfactory early adulthood in Queensland, Robyn Davidson (Mia Wasikowska) has become a bit of a misanthrope. The only human whose company she’d chose to spend her time with is herself.

What better challenge, then, to set for herself, than to walk seventeen hundred miles from the central Australian city of Alice Springs to the west coast.

It’s not something she can hope to do alone though. Firstly, she needs some camels to help her cross the desert and she spends two years training the animals that will be carrying nine months of supplies for her. Secondly, she needs money to support herself during the odyssey; National Geographic magazine agrees to sponsor her, on the condition that it’s photographer Rick Smolan (Adam Driver) can catch up with her a few times along the way to take photos.

Tracks follows the real-life story of the unlikely adventurer who became known as “the camel lady” as she attempts the unthinkable feat, while trying to avoid the inevitable attention it is sure to attract.

In all honesty, not much happens in Tracks. A young woman persuades someone to give her some camels, trains them and walks for nine months across the desert.

The scenery is stunning – from the majesty of Ayers Rock to the desolation of the wilderness – shot from the ground and the sky above, the cinematography befits the National Geographic photo-shoot the real-life story inspired.

Mia Wasikowska carries the weight of this film on her shoulders and she’s as strong a screen presence as any of her camels, but it’s difficult to identify with her as it’s never made clear why she’s so keen to attempt, let alone complete this adventure.

Back in the late 1970s, the world was different – there was less of a propensity for people to carry out crazy stunts; these days, they’re two a penny, as people raise money for this charity or that.

In most films, we’re rooting for the hero to achieve their goals because something depends on it – there’s something at stake. But here, Robyn wants to go for a walk – so she does. It’s a long walk – so it’s tough. But she gets a bit of help and – it’s not spoiling anything because this film is based on her book about the trip – reaches the coast in one piece.

So there’s little drama – no antagonist – the people she meets along the way – from the photographer to the camel farmer and the aboriginal elders – go out of their way to help, and even the extreme terrain rarely threatens to obstruct her adventure.

Her achievement was admirable and and we’re with her every step of her walk, but there’s probably more satisfaction to be gained from hunting out the original National Geographic article.