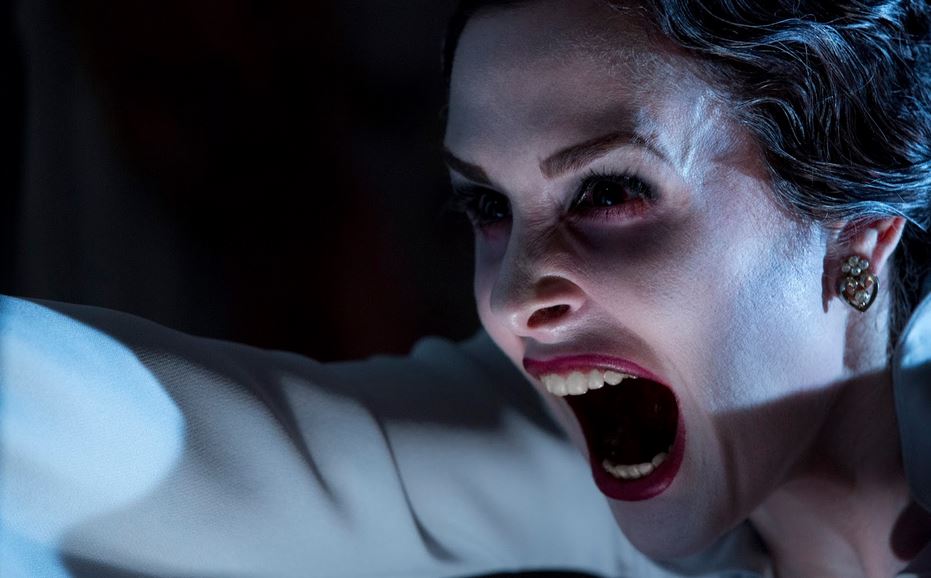 In the mid 1980s, Lorraine Lambert called in some paranormal experts to investigate the inexplicable behaviour of her son Josh. Twenty five years later, one of those investigators, Elise (Lin Shaye) died while following up what she had discovered at Josh’s adult home.

Josh (Patrick Wilson), his wife Renai (Rose Byrne) and their kids move back in with Lorraine (Barbara Hershey), in her spooky mansion where, before long, the family realise that whatever was haunting them at their old house has not gone away.

Renai not only sees a creepy lady in white in the living room, but she even gets knocked to the floor by her. Josh, meanwhile, starts to display the signs of demonic possession.

Elise’s assistants call on her long-time friend and associate Carl (Steve Coulter) to see whether he can contact her to get to the bottom of the haunting and give the Lamberts their life back.

Just weeks after James Wan directed Patrick Wilson in The Conjuring, the pair return with Chapter 2 – not Part 2 – of their previous outing, Insidious.

That was a silly, but moderately effective horror, in which Josh Lambert had to send his soul into a purgatory-like place called The Further, to rescue a young boy’s soul.

In this sequel, it appears that Josh’s return journey wasn’t quite as straight forward as his family had thought. We meet many of the same characters, including Elise and her side-kicks, one of whom is played by co-writer Leigh Whannel. We also go back to The Further, of course.

In a theatrical-release schedule packed with horrors, it’s important to be different to stand out, and while this film is creepy and frightful enough, many of the shocks come more from standard horror tricks, such as sudden loud noises and figures lurking behind doors or in dark corners – and there’s little original about it that we didn’t see first time around. Whereas last time, it was the future of the family that was at stake, this time, the troubled characters involved in the haunting are less sympathetic and more removed from the Lamberts.

The plotting is somewhat pedestrian and illogical, while the revelations fail to fizz and a clumsy tag at the end feels more like a trail for Chapter 3 than any kind of satisfying attempt to end this film. Patrick Wilson himself has suggested that there’s no need for his character to return for a second sequel, but it more than sets itself up to spin-off with the investigators. But I don’t think anyone needs a further visit to The Further.