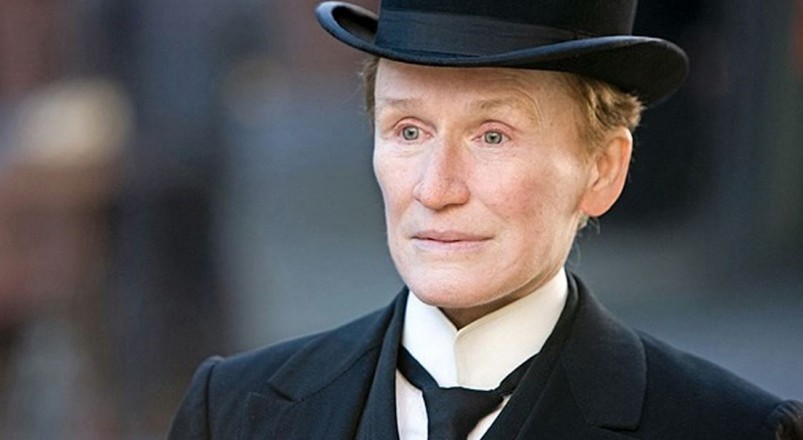 Albert Nobbs (Glenn Close) in a middle-aged waiter in an upmarket hotel in 19th century Dublin. He generally keeps himself to himself and even while taking breakfast with the other hotel staff, keeps conversation to a minimum.

Albert has a secret. He’s a woman. Seeing the inferior way that women are treated by society and desperate to be able to make more of her own life, our protagonist masquerades as a man.

But when Albert is forced to share his room with visiting tradesman Hubert (Janet McTeer), his secret is discovered; Hubert sees through the charade because he, like Albert, is in fact a woman.

Albert’s secret is safe with Hubert and they soon become friends – such as the loner that Albert has become is able to have any friends.

Hubert even encourages Albert to pursue his true dream of saving up enough to start his own business. But Albert starts to push his dream just a little too far when Hubert reveals that he even got married. Albert has long had designs on one of the hotel’s cooks, the angelic Helen (Mia Wasikowska) and believes he can woo her with his wealth. She agrees to “walk out” with him, but only because her boyfriend, the handyman Jo (Aaron Johnson) realises they can milk Albert for all his savings.

As if Albert’s life hasn’t been filled with enough sadness and heartache, the last thing he needs is this ill-fated attempt at a relationship with the sweet young gold-digger.

This is a project has long since been close to the heart of Glenn Close, so well done to her for eventually getting it to the big screen and indeed for taking on this challenging role herself. She – and Janet McTeer – deservedly earned Oscar nominations for their roles – as they take vastly different attitudes to the same quandary – how to get ahead as a woman in 19th century Dublin. Of particular interest is a scene in which the pair decide to go out dressed as woman but it’s been so long since they’ve done it before that the look like men in drag – women, playing women pretending to be men, playing at being women.

Certainly, being a man provided better job opportunities, but given that the same hotel was full of women workers – admittedly in the kitchen – it was unclear why someone as shy and insecure as Albert should have been so desperate to avoid the life he would otherwise have had by adopting a persona so secret it forced him to cut off from everyone else in his life, until Hubert came along.

Did the fact that his boss was a woman (Pauline Collins) not give him hope that women could rise to positions of influence? And was being a waiter really worth putting himself through hell for? A doctor, perhaps. Maybe a politician? But destroying your life to become a waiter?

The film follows two such characters, but doesn’t explore how commonplace this might have been – if, indeed, such women were two-a-penny, one might ask why no-one had seen through Albert’s charade sooner, but if it was tremendously rare, the chances of two ending up at the same hotel seems unlikely, from a narrative point of view.

Perhaps the most interesting and complex character was young Helen, sweet deep down but egged on to destroy Albert’s fragile heart by her money-grabbing boyfriend.

The tragic consequences round off the sad story of a sad character that makes you pity anyone whose life is so depressing that they can put themselves through such misery. But it also makes you wonder why anyone would want to spend nearly two hours watching little more than a sad person being sad.