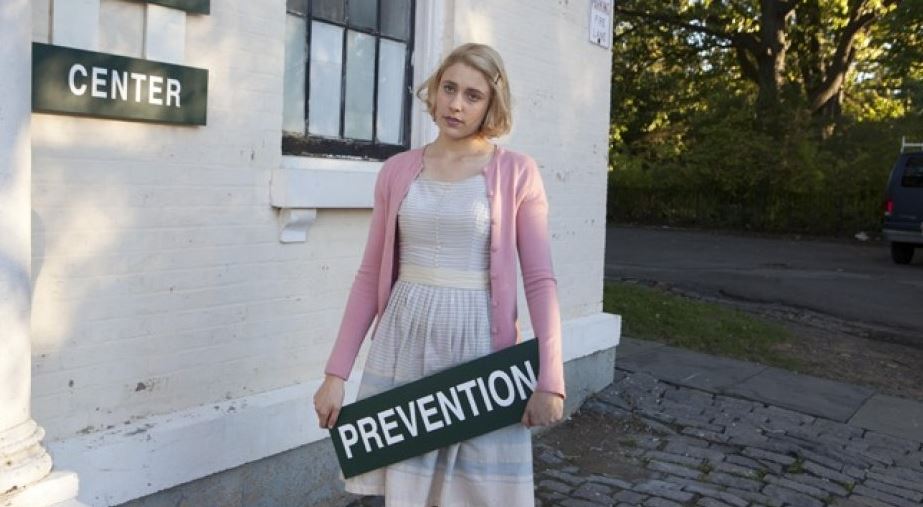 Prissy college girl Violet (Greta Gerwig) leads a group of well-dressed princess snobs around campus, trying to save their suicidal classmates by offering them free doughnuts and tap dancing lessons.

But while she seems confident and self-assured, Violet has her own problems and insecurities that she doesn’t want to emerge. Newcomer Lily (Analeigh Tipton) is the first girl to be bold enough to challenge Violet, but her metaphorical balls are admired by Violet, who is content to have someone to make her stop and think about her behaviour, for a change. Just think, though – she’s always right of course, it turns out.

Petite Heather (Carrie MacLemore) is happy to tow the line, while Rose (Megalyn Echikunwoke) sports a peculiar mock-English accent, in the mistaken expectation that this will make people take her more seriously.

The Queen bee swans around the campus, saving the world, until she experiences the misery from which she’s trying to protect others; she catches her boyfriend Frank (Ryan Metcalf) with a potential suicide she’s just rescued from her own relationship breakdown and then falls for Charlie (Adam Brody), who’s already making a bee-line for Lily.

The emotional and professional rivalries between the girls ratchet up the tensions as they each try to establish just who and what they really want and how they plan to achieve their goals.

It’s been thirteen years since Whit Stillman – an auteur who rose to prominence in the early nineties alongside the likes of Hal Hartley and Richard Linklater – last graced our screens. His Metropolitan, Barcelona and The Last Days of Disco surpassed Hartley’s films commercially and critically, but failed to secure him the kind of career with which Linklater has since been blessed.

His return has been eagerly awaited with a degree of trepidation; in truth, the damsels neither dazzle nor disappoint.

There’s much to admire about the snappy and often cutting dialogue and Stillman’s incisive take on student depression and supercilious yet selfless efforts to conquer it. The more standard student relationships that make up a film genre of their own are not as skillfully portrayed – they comes across as somewhat clunky and contrived, while the “Suicide Prevention Center” itself feels somewhat arch.

Bright and bouncy performances – particularly from Gerwig and the doe-faced MacLemore – do well to lift the material, although the irritation of Echikunwoke’s accident takes too long to pay off. Tipton does what is asked of her, but her character is less eccentric and so less interesting. As for the boys, every last one of them is a stereotype – from the bookish womaniser to the brainless jock.

It’s fun, but slight. It won’t revive Stillman’s career, but it won’t confine him to another thirteen years in the cinematic wilderness.

But there is a sense in which while thirteen years have passed and the characters he brought us in the 1990s will have have moved on and grown up, he’s still playing with the kids. I’d rather see what he can do with characters who’ve matured with the benefit of his own age and experiences.