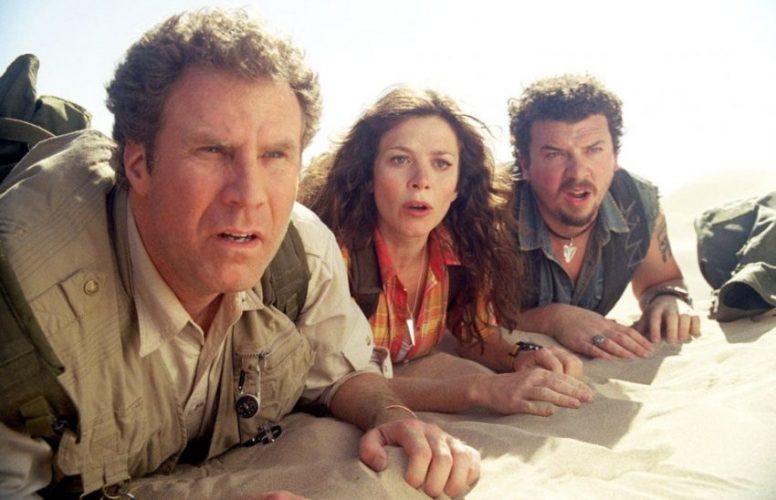 Quantum paleontologist Doctor Rick Marshall (Will Ferrell) has long been the laughing stock of the science world.

He’s been reduced to lecturing…children. Just as he’s about to give up on his time-travelling dreams, a British science graduate who’s been studying his research, Holly (Anna Friel), bursts into the classroom and encourages him to press on and build the tachyon amplifier.

With his machine at the ready, the pair head to a remote desert theme park, where the owner Will (Danny McBride) leads them into a cave.

The tachyon amplifier kicks into action and the three of them are thrust through a time-warp and emerge, minus the machine, in the eponymous “land of the lost” – a land, littered with earthly objects as varied as planes and swimming pools, and populated by anthropomorphic lizards and monkey-men.

One of these monkey-men, whose cackling rants lead them to believe he’s called Cha-Ka (Jorma Taccone) ends up tagging along with Rick, Holly and Will in a series of adventures that see them coming face to face with dinosaurs and having to save the universe from tunic-wearing aliens.

But the real goal of their mission is to find the tachyon amplifier – their only way home.

This is a big screen version of the 1970s TV show – but after three more decades of time-travel, this feels very tired and unoriginal.

Most of the budget seems to have gone on dinosaurs that are every bit as impressive as those in Jurassic Park, which means there was clearly no money left for the costumes which leave most of the aliens looking marginally less convincing that their counterparts from the early incarnation of Doctor Who. They clearly didn’t even have enough petty cash to visit the local fancy-dress shop.

Any story is purely accidental – there is no more plot than “mad scientist and pals have a series of adventures while trying to find the machine that will get them back home” – there is no logical progression to any of these incidental adventures. It simply doesn’t matter what happens – the film is driven by the gags – and therein lies its biggest problem – they’re just not funny.

Apart from a couple of pleasing laughs, most of the attempts at humour are rather childish – both in their content and execution.

While he just about shows some of the naïve charm to inhabit his previous screen incarnations, Will Ferrell’s performance – mostly likely because of the material he has to work with – is well below his best.

Anna Friel’s attempt to burst onto the big screen is likely to see her bumped straight back down to telly.

As for Danny McBride, for a film of this size, he’s too unknown an actor to carry such a significant supporting role – it’s the kind of part that would’ve needed a Jack Black or even a Seth Rogen to bring his own wit to another mindlessly underwritten part.

Most of the characters and objects seem to exist for no reason other than for Ferrell to try to bounce jokes off, but they mostly don’t bounce…the rather splash back in his face.

It’s not an unpleasant film – just not at all exciting and nothing like as funny as it could have been.

It’s not an objectionable watch – it’s just a rather pointless one, best avoided unless you have a hundred minutes you really don’t mind never seeing again and a few cans of alcohol to reduce your expectations.