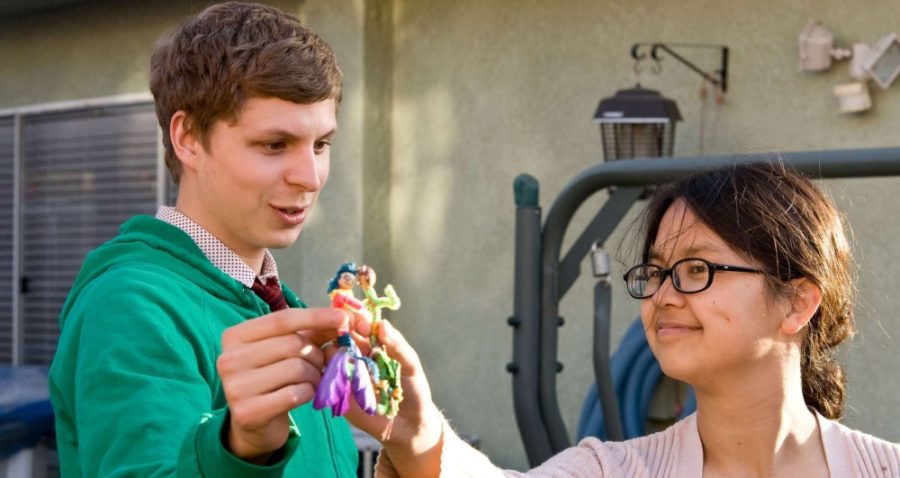 Twenty something American comedienne Charlyne Yi sets out on a voyage across America to try to discover the meaning of love.

She’s convinced that she’s never been in it, felt it or had anything else to do with it and she hopes her best friend, documentary film-maker Nicholas Jasenovec (Jake M Johnson), can help her unlock its secrets.

Together, they interview some of her celebrity friends, strangers on the street and successful couples across the USA to try to get to the bottom of this mysterious concept that some fall into, while others never experience.

Along the way, Charlyne is introduced to Nicholas’s friend, the actor Michael Cera, and sparks start to fly between them, helping her to understand what everyone else is getting so excited about.

There are two big problems with this.

For one – the film can’t decide what it wants to be – or at least isn’t honest with us about what it’s trying to be.

It pretends to be a documentary, but while Yi, Cera, Rogen and Martin – among others – play themselves, the director himself is played by an actor. Added to this, anyone in the know will tell you that at the time of shooting, Yi and Cera were a real-life couple – so their meeting and blossoming relationship, for this film, is obviously artifice.

So how much of the rest of the set-up can we believe?

Secondly – given that Yi is sold to us as a real-live stand-up comic, not only is she not funny at all during the film, she neither tries nor appears even to have the capacity to be.

OK – so they say that many of the best comedians are quite serious in real life, and arguably, a serious exploration of love could be seen to come into this category, but you’d expect that when she’s relaxing with her best friends, there’d be at least some sense that she might be able to crack – at the very least – a witty observation.

But she can’t offer anything more than the occasional naively charming aside.

There are warm moments and some humour from the likes of Rogen and Cera and the film washes over you perfectly harmlessly, but Yi is about as dull a guide to the crazy-little-thing-called-love as we could be lumbered with and in a shade under an hour and a half, we neither learn anything profound nor experience much fun.

It sells itself as an enlightening exploration of love, as experienced by a comedienne – but we don’t learn anything about love and almost never laugh.

And the closest we come to either, we have to take a step back and remind ourselves that although it’s selling itself as a documentary, almost nothing in it is real.