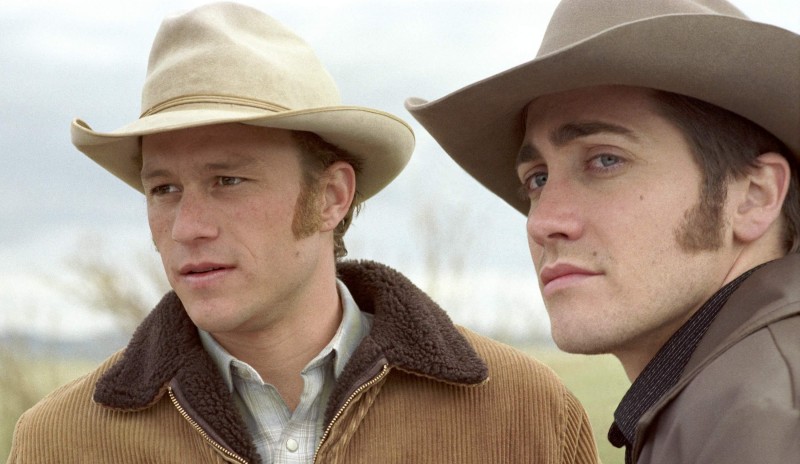 In 1963 Wyoming, two young men – the introverted Ennis (Heath Ledger) and the more forthright Jack (Jake Gyllenhaal) – meet when they’re hired to herd sheep across Brokeback Mountain for the summer. During their time together, isolated from everyone and everything except the weather, they surprise themselves by ending up having a brief but passionate affair.

A storm cuts short their job – and their relationship – and they return to their normal lives, where within a couple of years, both men are married with children.

But these guys aren’t cut out for the family life and they can’t stop thinking about each other. Four years after that fateful first meeting, they meet up and rekindle their secret affair, faking fishing trips to get away from their respective families.

This is a tragic story of unrequitable love in a time when society didn’t look too kindly on tough cowboys falling in love with each other.

People will tell you this film is groundbreaking. But what’s ground-breaking about a film where gay characters are denied the freedom to express their feelings in public? A groundbreaking film would be one where a lead character just happens to be gay, and his sexuality is irrelevant to the story in any way. Groundbreaking would be having a cool, tough-guy, private detective being gay in a neo-noir thriller – like, say, Val Kilmer in Kiss Kiss Bang Bang.

Admittedly, it’s unusual to have big stars playing such overtly gay roles – but then, Gyllenhaal and Ledger are hardly the most high profile Hollywood actors and Tom Hanks has already collected an Oscar for his worthy role in Philadelphia.

That’s not to take away from the drama here – it’s a film about two people, trapped in loveless marriages, while their true soul-mates are beyond their reach – and it’s a sad reflection on the time that because their soul-mates happened to be of the same sex, society wouldn’t let them be together. But the film is set between the 60s and the 80s and society has changed. Coming a month after Sir Elton John and David Furnish got their relationship recognised in law here, this film feels, in a sense, like an historical document, rather than a commentary on current societal problems.

While the performances themselves are undoubtedly powerful, Gyllenhaal’s self-confidence does begin to grate – if he’s as sure of his sexuality as he seems, you kind of think “stop pussy-footing around and get on with it” – while Ledger’s unintelligible grunting grows rather wearying.

What’s interesting is that unlike most films, the enjoyment you get – or emotion you feel – as a result of the movie depends not so much on the performances, story, writing or directing – but on your own personal experiences.

Discussing this film with gay friends, I’ve been told that actually, outside major cities, the kind of story portrayed here is indeed still the norm. As such, people who’ve had to hide their own sexuality, suppress their secret desires and suffer the loneliness of a loveless relationship will naturally get more from this film, as they’ll identify with its theme on a much deeper level.

This is, perhaps, a great testament to the skill of Ang Lee – a straight director – to be able to strike such a deep chord with the gay community.