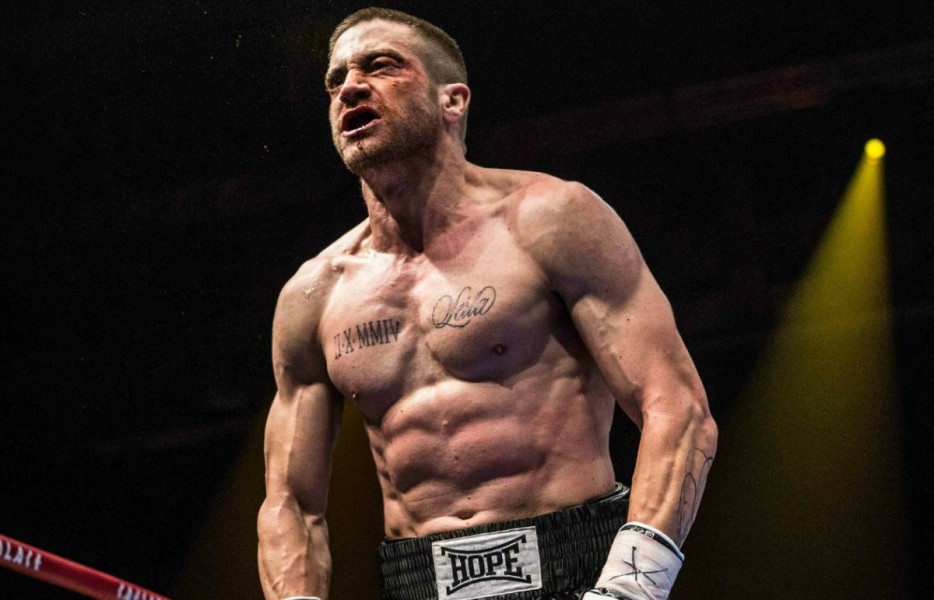 Southpaw centres on the reigning Light Heavyweight Boxing Champion of the World, Billy “The Great” Hope (Jake Gyllenhaal) who seems to lead the perfect life.

He is rich and successful and has a beautiful and loving wife (Rachel McAdams) and a wonderful daughter (Oona Lawrence).

However after suffering a personal tragedy his whole life starts to unravel; he loses custody of his child and his lifelong manager and friend (Curtis “50 Cent” Jackson) leaves him for his rival Miguel “Magic” Escobar (Miguel Gomez).

On hitting rock bottom he turns for help to a no nonsense trainer and former fighter (Forest Whitaker) at a rundown local gym.

If you are expecting a boxing movie with a fresh twist then you are going to be mightily disappointed because this is one endless boxing cliché.

However what makes Southpaw punch above its weight is Gyllenhaal’s impressive and statuesque performance as Billy, the orphan who fought his way out of the system and Hell’s Kitchen to make a rewarding life for himself and his childhood sweetheart Maureen, whom he met at his orphanage.

In contrast to his gaunt appearance in last year’s Nightcrawler, Gyllenhaal trained non-stop for six months to acquire the boxer’s build and skills and it certainly paid off as he appears every inch the professional fighter and one who has been hit once too often.

Interestingly, the role was originally intended for hip-hop artist Eminem who dropped out at the last minute to focus on an album instead.

McAdams is outstanding as the glamorous but straight talking Maureen, who is fiercely supportive of her husband and whose advice Billy is wholly dependent on. As you see him being viciously pummelled at the beginning of the film, you feel her concern and fear for his life as she watches ringside and then in his dressing room as she looks at him in heartbreak and horror. The love and the special connection they have is electric as she warns him that if he doesn’t stop he will become punch drunk in a few years times and will be no good to his daughter or herself.

She is also the voice of reason as she tells him that his manager and his sycophantic entourage will scatter like cockroaches once his bubble bursts – which is exactly what happens.

But it is Lawrence who is the biggest revelation as Leila, their whip smart kid, who steals every scene from under Gyllenhaal’s nose in their father and daughter sessions.

Director Antoine Fuqua, who is a boxer himself, pulls no punches in portraying the brutality and punishing effects of the sport in the most realistic way. It is vicious and unrelenting as he makes you squirm at every blow that Billy receives and then shows you the aftermath as he wakes up barely recognisable, all battered and badly bruised and coughing up blood.

The film also has no qualms in pulling heavily on the heartstrings as it explores fatherhood and Billy’s relentless battle to win his daughter back, plus redemption with the aid of the wise and humble Tick Willis (Whitaker), the weary and worn trainer who is battling his own demons.

Clichés aside, this is an intensely gripping, brutally violent, heartrenching drama punctuated by another knock-out performance by Jake Gyllenhaal.