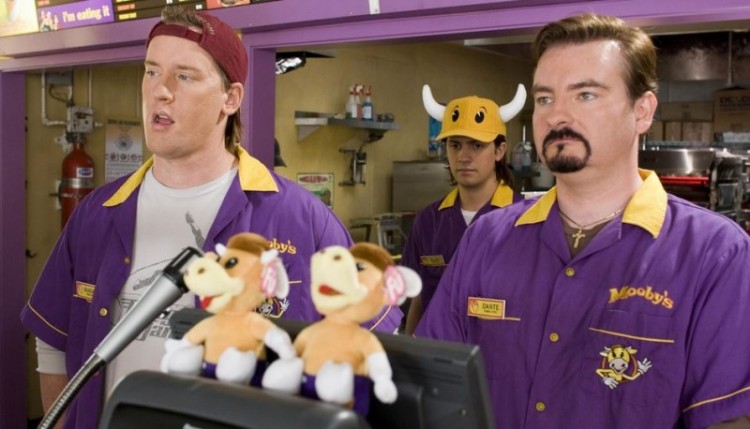 They pair are now working for Becky (Rosario Dawson) at fast-food joint Mooby’s.

Dante’s grown up a bit – he’s about to get married to the beautiful and wealthy Emma (Jennifer Schwalbach) – Randal hasn’t grown up at all – he’s still all about drinking, sex, playing pranks and general slacking.

Moving with them to the burger bar are the spaced out local drug dealers, Jay (Jason Mewes) and Silent Bob (Kevin Smith). They haven’t changed a bit, either, since they first hit the big screen.

They’re all joined by newcomer Elias (Trevor Fehrman), an uber-geek whose enthusiasm for cleaning floors is matched only by his passion for Lord of the Rings.

What story there is revolves around doubts Dante is having about his upcoming nuptials, and Randal’s efforts to fuel those doubts – or at least have as much wicked fun as he can, while his only friend is still in town.

There are two distinct sets of audiences for this film.

First, the fans of 1994’s cult hit Clerks, who’ve been waiting for twelve years to find out what happened to their heroes. For them, this is a must – a four star catch-up of characters who mean something to them.

For this audience, they will have as much fun as Kevin Smith and his friends (including cameos from the likes of Ben Affleck and Jason Lee) clearly had in making it.

Then there’s everyone else. If you haven’t seen the original, not only will many of the nuances of the characters be less meaningful, but the characters themselves could seem objectionable to the extent that you’re rather pleased when things don’t go right for them.

Many of the gags will make you – well – gag. It’s clear that some of the material was written simply to shock – the incoherence of the bestiality scene (yes, you read that right) – will perturb viewers with all but the strongest of constitutions.

Most of the rest of the humour is simply puerile which, while it felt at home in Smith’s debut film, twelve years ago, seems a little immature for a film-maker of his present stature.

At risk of sounding like a spoil-sport (no prizes for guessing which of the two audience groups I fall into), this film isn’t big, it’s not clever and it’s not that funny, but for geeks like Elias, it’ll be a riotous funfest whose lines they’ll be quoting from years to come.