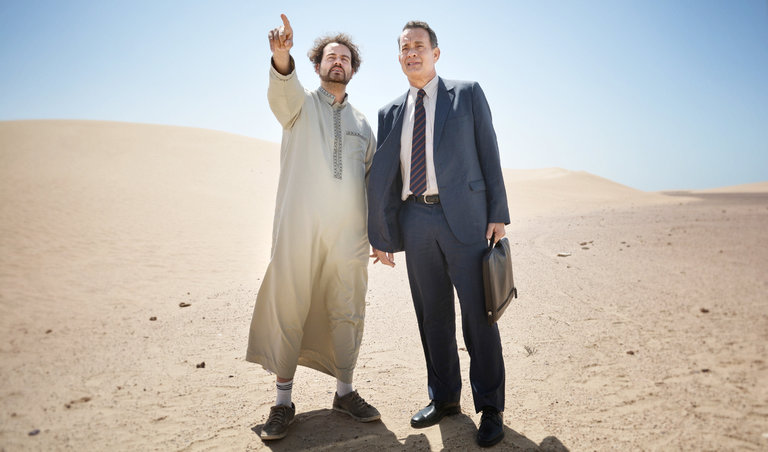 Alan Clay (Tom Hanks) is a salesman for a major American computer and communications firm.

He’s assigned to lead a bid to sell new hologram technology to Saudi Arabia, by pitching to the elusive king himself.

Jet-lagged on arrival in the country, he sleeps through his alarm and misses the shuttle-bus to his meeting, so he has to call a cab.

His driver, Yousef (Alexander Black) sells himself as much as a guide as a cabbie – and when Alan finds his oversleeping becoming a recurring problem, Yousef starts becoming a friend.

Alan’s bosses start to get concerned when the business trip drags on, as the meeting with the king is indefinitely postponed, but he’s determined to stick it out.

In a country where he doesn’t fit in and the cards seem stacked against him, only a growing camaraderie with his driver and an unexpected but forbidden friendship with a female doctor (Sarita Choudhury) stop him losing hope.

This is a bit of an odd concoction. It looks and feels substantial, but when you look into it, there’s nothing really there – a bit like a hologram, really.

The director Tom Tykwer begins with a remarkably imaginative dream-sequence, in which Tom Hanks delivers his own version of the 1981 song Once in a Lifetime by Talking Heads, before the film descends into something far more pedestrian.

Hanks is as likeable as ever, but even he is not a strong enough presence to carry a film with almost no tension (how engaged can anyone get about about whether the king might turn up today?), little narrative (it’s mostly a film where nothing happens) and few surprises (the relationship between Alan and his doctor, while neatly handled, is completely predictable).

There are moments where the film provides interesting insights into the cultural differences between Saudi Arabia and the west – often through Alan’s interaction with his driver, one of the more sprightly performances of the film.

A Hologram for the King is warm and charming but just too inconsequential. It’s not sure whether it’s trying to be a fish-out-of-water comedy, an odd-couple buddy movie, a journey of self-discovery, a social drama or some kind of a mixture of all of the above. The one thing that’s clear is that it doesn’t really have much of a message about business, international relations – or indeed people.

Perhaps the most interesting thing about it is, like last week’s Whiskey Tango Foxtrot, its casting choices; at a time where Hollywood is increasingly sensitive about a lack of good roles for ethnic minorities, the two main Arab roles are the driver, played by a Caucasian American and the doctor, played by a Briton of Indian extraction. Of course, as I said last time, that’s not to say that the roles should have been played by Saudi Arabians – or even Arabs – actors are meant to play other roles. But it’s notable that two films in as many weeks have significant minority roles played by actors of different ethnicities – it’ll be interesting to see whether the same can be said a year from now.