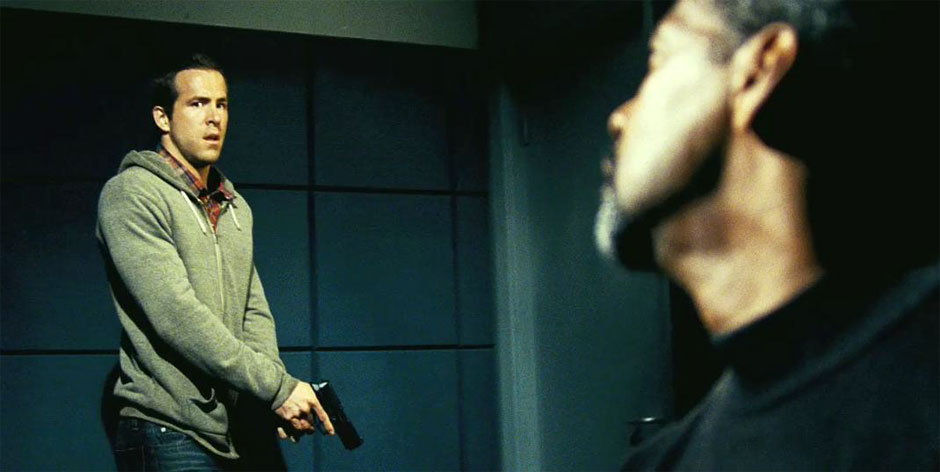 Junior CIA officer Matt (Ryan Reynolds) is getting fed up with his Cape Town posting. He oversees a safe house where enemy agents can be questioned, but no-one’s been brought in for a year. He’s hoping his boss Barlow (Brendan Gleeson) will promote him to a more exciting job in a busier location.

But things look up when a former CIA operative-gone-bad, Tobin Frost (Denzel Washington), is brought in. He’s been selling government secrets to whoever will buy them – something that’s made him many enemies.

When a gang of mercenaries shows that the safe house isn’t quite so safe after all, Matt is forced to flee with his prisoner to ensure that he’s brought to justice.

But every step of the way, Frost is trying to outsmart him to escape his custody, while vested interests both inside and outside the agency are trying to thwart his efforts.

After spending the whole of his recent film, Buried, inside a box, Ryan Reynolds bursts out in full action hero mode, rushing around South Africa, with guns blazing and a treason suspect in tow. He makes an effective, if not particularly interesting, hero – but we’re asked to believe that he’s playing out of his league, while by definition, he’s meant to be a highly trained operative, so why shouldn’t he be as impressive as he turns out to be?

Tobin Frost’s cunning ensures that Matt’s job is never easy as the pair tear around, dodging bullets, never knowing who to trust – particularly each other.

Washington displays a quiet menace, but is cuddly by comparison with his Oscar-winning turn in Training Day.

As a spy film, it’s filled with twists and turns and as an action thriller, the plot is never quite coherent if taken at face value.

The interplay between the two protagonists is strong, but too many of the characters feel like the kind of stereotypes who turn up in every film of this kind, which makes certain plot developments less surprising than they might otherwise be.

The action sequences are well choreographed, but even there, they don’t seem convincing; a stampede outside a sports stadium while a match is going on is visually impressive but narratively unlikely, as everyone would be inside, engrossed in the action on the pitch, rather than worried about – or even aware of – what’s going outside.

It’s a creditable and exciting enough film, that increasingly starts going over the top as it storms towards its conclusion – not least with characters acting beyond the realms of credibility, even within the confines of a fiction; a film set in the real world has to feel like its set in the real world.

It’s one of those films where the failings are in the writing, but everyone else does the best with what they’re given.

If it’s not taken too seriously, Safe House is a safe bet for an entertaining couple of hours, but too much thought won’t be rewarded.