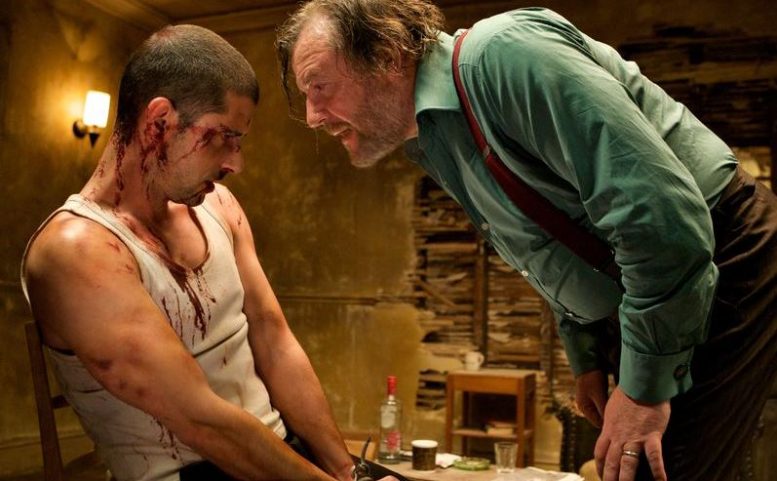 Things appear to be going well for tough guy Colin (Ray Winstone), until his wife Liz (Joanne Whalley) informs him that she’s leaving him for another man – a French waiter (Melvil Poupaud).

He takes this rather badly and turns to the bottle – and Nilsson’s “I can’t live, if living is without you.”

With the aid of a series of flashbacks, most of the action – such as it is – takes place in an east London safe house, where the chums can scream profanities at the hapless French-man – and each other – without interference from the neighbours – while he spits insults and blood back at them.

There’s no doubting the strength of these performances – with the ferocity of these characters, you wouldn’t dare criticise any of the key characters.

The script – from Louis Mellis and David Scinto, who wrote Sexy Beast – is a blistering litany of swearing, unmatched by anyone apart from The Thick of It’s Malcolm Tucker. But he’s a softy at heart – these guys mean it.

The film’s biggest weaknesses are that not enough happens – and the characters feel too much like parodies of the kind of gangsters we’ve seen all too often – this is how the youngsters we saw in Lock Stock might well handle the same situation, three decades hence – lots of shouting, swearing and tough talk – but more spitting than true menace.

Trying to make evil gangsters quirky and loveable isn’t easy – McShane and Hurt do a remarkable job of this – but, of course, it isn’t necessarily advisable, from a dramatic point of view; it softens the blow of the violence and takes the comic edge off the humour.

The tone of the film feels confused and lacking in effective direction.

In films like Goodfellas, Joe Pesci’s Tommy is shouty and sweary, but he’s balanced by more down-to-earth performances from Robert De Niro and Ray Liotta.

Here, Dillane and Wilkinson are a little less caricatured than their co-stars, but the ensemble still feels oppressively overblown.

With its limited cast and location and flamboyantly grandstanding performances this looks – and feels – like stage-play – a stage-play that someone thought might make a good feature film, but couldn’t quite pull it off.

Shove these same guys on a stage to deliver the same performances, so that you could sit in the front row and feel their spit and their anger first hand, and it would be a fearsome experience you’d never forget.

On film, it’s all too easy to forget, as the same themes have been brought to the big screen with more drama, more consequences and more to grab you.

It just feels too small for the cinema. If not on the stage, it might be more suited to a 44 inch screen.