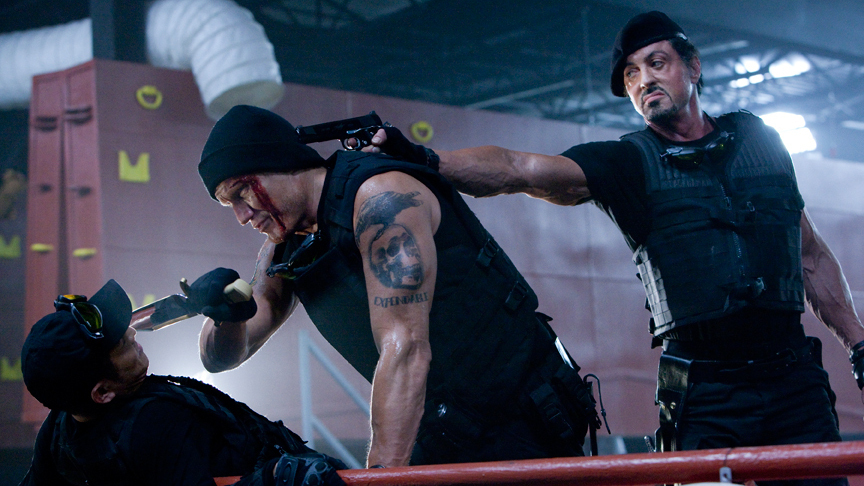 Barney Ross (Sylvester Stallone) is the leader of a biker gang of mercenaries who’ll take any job as long as they get paid and they get to fill people with lead and slash their flesh with very sharp knives.

When we first meet them, Ross and his sidekicks (including Jason Statham, Jet Li and Dolph Lundgren) are rescuing hostages from a gang of Somali pirates.

CIA agent Church (Bruce Willis) is looking for someone to do a big job for him, ridding a drugs baron (Eric Roberts) and a dictator (David Zayas) from a Latin American island state.

Of course, The Expendables take the job and as luck would have it, during the mission, Ross falls in love with the dictator’s daughter, one of his team members defects to the bad guys – and then, inexplicably – back again – pretty much everything that can be blown up is blown up and they just keep shooting and slashing until there’s no-one left to shoot or slash.

With the exception of Jean Claude Van Damme and Steven Seagal, pretty much every action star of the past thirty years is on show here – but you might feel a little cheated as the posters sail close to the breaching the Trades Description Act. Yes, they’re all in it – but the only action you get from Schwarzenegger and Willis is the Governator walking up the aisle of a church to speak to Willis for a couple of minutes before – and here’s the exciting bit – turning round and walking back out again.

Rourke has a far more interesting role, as a former military man who is now kept tremendously busy as the gang’s tattoo artist.

But as good a performance as he gives, it’s hardly The Wrestler or Sin City.

The only ones who really do very much are a gurning, gun-slinging Stallone and a knife-wielding Statham.

This is an old-time action film in the worst sense of the term – it’s a bunch of old-timers doing action for almost no discernable reason. The plot – such as it is – certainly isn’t a reason to be running around like that. And given that it was clearly an excuse to get a bunch of hard-men together to boast about the cast, you might have expected at least a light dash of irony, but what little humour there is comes largely from laughing at the film’s failures than with its successes.