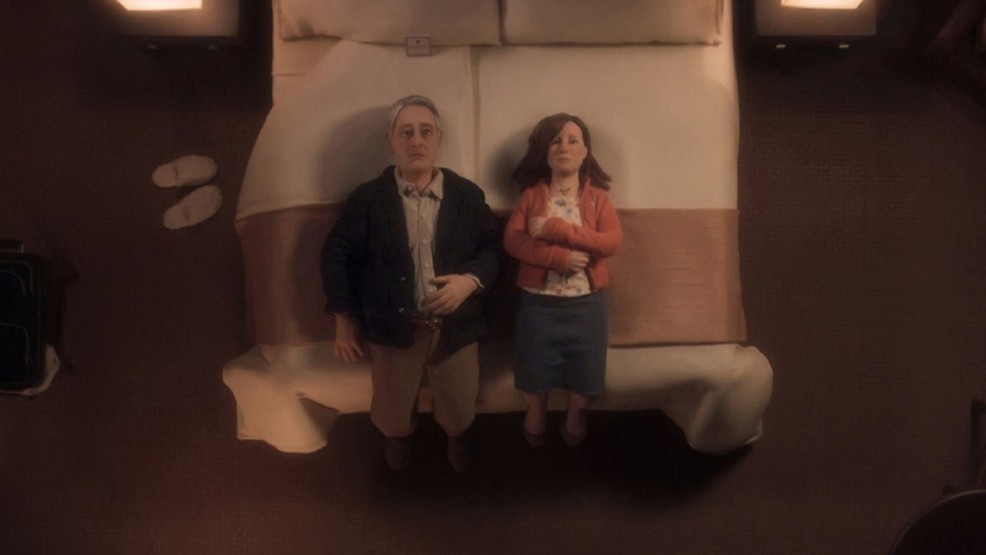 Michael Stone (voiced by David Thewlis) is married with a child and is a highly respected customer services adviser who travels the US, giving lectures to big businesses on how to keep their clients happy.

But he’s not happy himself. Life is getting him down. It’s all so repetitive. Nothing inspires him anymore. It’s not that he doesn’t love his family or even his job. It’s more that life just isn’t giving him the excitement that he’d hoped for.

One of them, Lisa (Jennifer Jason Leigh), appears to provide him with the spark that he needs to reinvigorate his life.

When the man who wrote Being John Malkovich, Adaptation, Eternal Sunshine of the Spotless Mind and Synecdoche, New York – among others – deems it necessary to produce something new, you can be sure that it’s going to be at the very least, thought provoking.

But on the surface, a story about a man going through a mid-life crisis doesn’t seem particularly ground-breaking.

However, Charlie Kaufman’s Anomalisa has two unique selling points;  firstly, it’s animated and secondly, in an inspired cinematic illustration of the banality of humankind – or more specifically, Michael’s perception of the sameness of everyone he knows and meets – every other character shares the same voice.

Male, female, adult, child – everyone other than Michael is voiced by Tom Noonan, until – that is – he encounters a young groupie, who appears to be able to offer him everything he feels his life is lacking.

It’s interesting that such simple, intertwined gimmicks (the common voice would not have worked so well without the animation) lift which could otherwise have been a somewhat typical tale of middle-aged woe to what becomes an insightful examination of a man going through an emotional crisis.

Played out over two days in the gloomy bedrooms and corridors of a hotel that has as little personality as any of the humans in Michael Stone’s world, Anomalisa will force anyone to stop for a moment to assess their own lives.

In truth, the story and its conclusions aren’t ground-breaking, or particularly revealing – although the downbeat ending perfectly rounds off an unexpected tale – but Kaufman’s ever original story-telling methods make this another film worth the wait.

While the destination isn’t particularly inspiring, it’s certainly worth the journey.