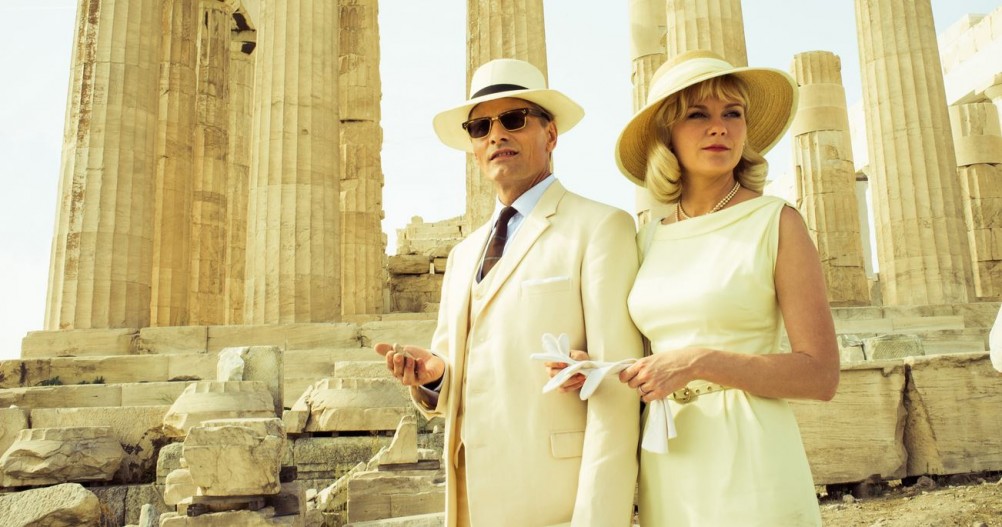 It’s 1962 and wealthy American financial advisor Chester (Viggo Mortensen) and his trophy wife Colette (Kirsten Dunst) are on holiday in Athens. They get chatting to a fellow American, Rydal (Oscar Isaac), who’s working as a tour-guide – conning a few drachmas off his unsuspecting marks, in cahoots with market traders who are in on his scams.

When a secret from Chester’s past catches up with him, he is forced to go on the run with his wife, but when Rydal catches him in a compromising position, he concludes that it would be safer to take him along for the ride, too.

Rydal will do pretty much anything for money, so he’s happy to join the couple as they flee Athens for the safety of the countryside, helping with everything from the language to getting fake passports.

But it’s clear that Rydal isn’t just doing it for the money – from the moment he first saw Colette, he couldn’t get her out of his mind.

With killing, theft and coveting someone else’s wife, this film – from a Patricia Highsmith novel – does a good job, if nothing else, of breaking a few of the ten commandments; no wonder the hand of God seems to come down to punish them.

But the way the story unfolds, it seems to Highsmith seems to be backing Rydal – the small-time con-man with aspirations for the big-time and eyes for Chester wife – over the fraudster who seems to be followed by bad luck from the moment he pockets the money of his clients and disappears.

It’s interesting the extent to which – even if you didn’t realise this was an adaptation of a Highsmith novel – the first film that comes to mind is The Talented Mr Ripley; it has that same Americans up to mischief abroad feel and similarly splendours in the European locations. But first-time director Hossein Amini can’t give this film the gravitas and passion of Anthony Minghella’s predecessor.

With sumptuous scenery and couture costumes, The Two Faces of January is a well told but simply narrative that feels like it’s rooting for the wrong guy. It’s enjoyable but forgettable and does more for selling Greek holidays than suspense thrillers.