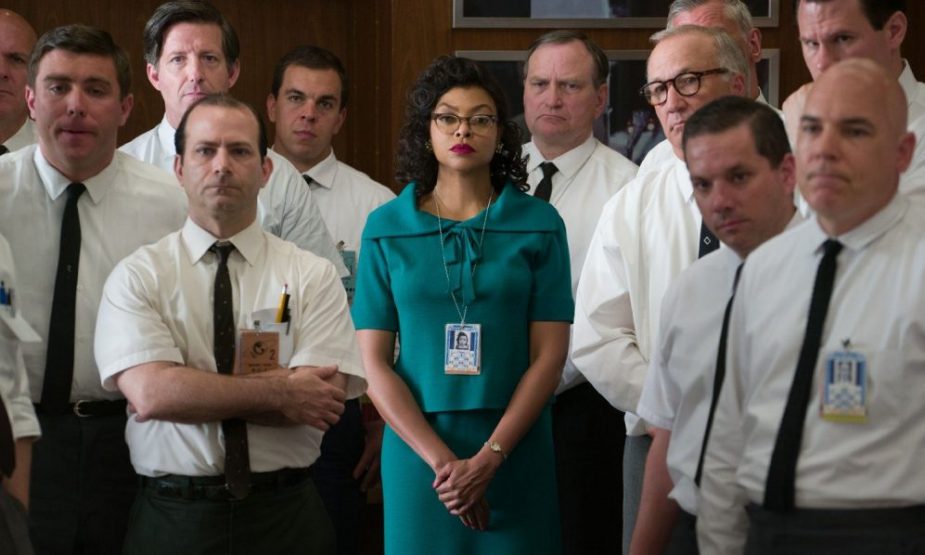 In the early 1960s, Dorothy Vaughan (Octavia Spencer), Katherine Johnson (Taraji P Henson) and Mary Jackson (Janelle Monáe) are three mathematicians working at NASA. In the pre-computer age, they’re computers – people who compute – more accurately, black women who do some of the more mundane calculations that are below the white, males aeronautical engineers.

But while American society at large looks down on both black people and women, NASA is fully committed to a space race and it can’t afford to let any talent go to waste.

Before long, the bosses have to bite their tongue as Katherine’s expertise is been called upon by Al Harrison (Kevin Costner), whose team is trying to calculate the landing coordinates for the mission to put the first American into orbit, Mary has been recommended for the engineering department and Dorothy has taught herself – and the rest of the women – how to use NASA’s first computer – now I’m talking about the machine kind.

In her efforts to secure a well-deserved promotion, Dorothy constantly clashes with her officious white boss (Kirsten Dunst), Mary has to go to court to earn the right to go to a whites-only college to study to move up the ladder and Katherine faces the indignity of having nowhere to go to the toilet in the whole building.

The three young black women struggle against the odds – and the segregation and prejudices of the pre-civil-rights-movement years – to convince the authorities that race and sex shouldn’t get in the way of scientific progress.

In the year after the Oscar So White controversy, it’s no surprise that there are three high-profile films featuring black characters in the running for awards, but while the others – Moonlight and Fences – are serious and earnest, this one is bright, breezy and a lot of fun. Maybe it’s just that space travel is more exciting a subject than drug-dealing, sexual awakening, social deprivation or infidelity, but it certainly makes for a more confident piece of entertainment.

It’s also interesting to note that this is really the only one of the three to address the civil rights issue – apart from a couple of throwaway remarks in Fences.

But it’s the way that the race issue is dealt with here – particularly in Taraji P Henson’s Katherine’s storyline – using humour to highlight the absurdity of the way black women were treated by white men at the time, that makes the message powerful, without feeling preachy.

While the experiences of these three women – based very much on real-life stories – clearly showed that racism – and sexism – in the workplace could be overcome, it’s a stain on American society that it was a long time before the playing field was levelled, even slightly, for anyone else – and more than fifty years later, the country still struggles with racial and sexual equality issues.

There are three stories here, rather than one, but they intertwine effectively enough, through the friendship of the women, but much of the narrative unfolds in a pedestrian way, with the three complex protagonists surrounded, largely, by an array of stereotypical grotesques. Apart from the three leads – although, of course, the only Oscar nominee, Octavia Spencer, is up in the supporting category – only Kevin Costner comes out of this film with much to be proud of. Even Mahershala Ali, so strong in his brief screen-time in Moonlight, is little more than a cardboard cut-out of a love-interest here.

The story is out of this world, the central performances are uplifting, but the screenplay and directing are by turns predictable, plodding and somewhat uneven, with some of the subplots being less convincing than others.

But the hopeful message and its light-hearted delivery make Hidden Figures a tremendously enjoyable, if not stellar, piece of entertainment.