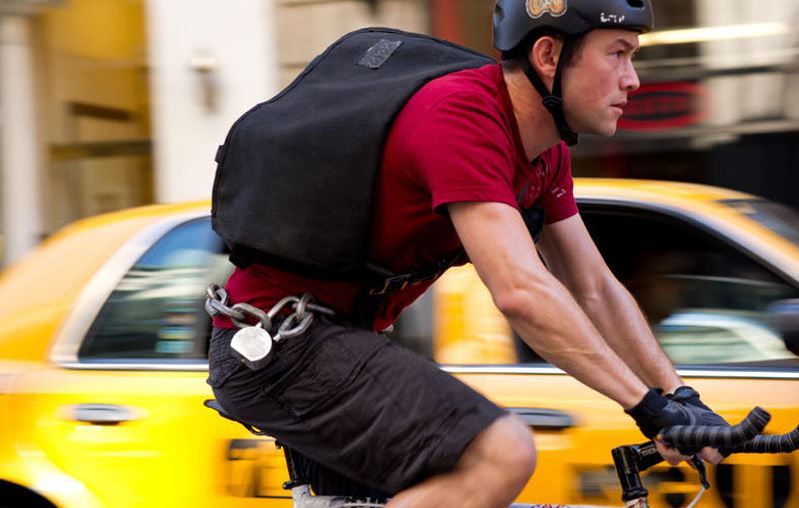 Wilee (Joseph Gordon-Levitt) is a Manhattan bike messenger so serious about his trade that he uses a heavy steel-framed bike, with no gears and no brakes.

Because of his no-nonsense efficiency, he’s specifically requested for what looks like being a simple job; a letter needs to be delivered from a college on the Upper West Side to Chinatown.

But before he’s even left the college campus, he’s approached by an irate guy in a suit, Bobby (Michael Shannon), who’s keen to get his own hands on the envelope.

Pride in his job ensures that Wilee gives Bobby the slip and sets off on his journey south, but suddenly, Bobby’s car appears behind him in the traffic.

Weaving erratically through Manhattan’s dense traffic, Wilee finds himself being  chased by everyone from an increasingly crazed Bobby to a bicycle cop; Bobby wants his envelope, the bicycle cop wants him.

What’s in the envelope? Who’s he delivering it to? Why does Bobby need it? Does he need the trouble? Can he get out of the job? Or can he just not resist the lure of the premium rush?

If you can forget Bradley Wiggins winning the Tour de France and Britain’s Olympic and Paralympic success at the Stratford velodrome, cycling has never looked so exciting on screen – oh, except perhaps in ET.

But watching Joseph Gordon-Levitt pedaling up and down Manhattan’s traffic-clogged streets like a bullet, being chased – or raced – by cops, crazies and colleagues, will get your heart pounding. And we get a fascinating insight into his mind, as he plans how to avoid obstacles, without being able to rely on the luxury of brakes. Quite why it’s so hip and cool to be riding with no gears and brakes is never quite explained, but just go along with it and you’ll enjoy the ride.

Best known as the writer of Hollywood hits, from Jurassic Park and Carlito’s Way to  Mission: Impossible and Sam Raimi’s Spider-Man, David Koepp has also proven himself to be a useful director, with the creepy Stir of Echoes and the Ricky Gervais comedy Ghost Town. This time, once again, he’s taken up both mantles for an action film so fast-paced that he couldn’t keep up with his own plot.

It takes more than a fractured time-line to add complexity to a story about a courier delivering an envelope, whatever happens to be inside, and whoever is trying to get in his way. He gives up. Unconvincingly. Then he has another go, for no particular reason other than that the film isn’t finished yet. And no matter how far ahead of one character another finds himself, when the plot requires it, he catches up. But this isn’t about the narrative – it’s simply an adrenaline-fueled ride around New York City that will bring your blood to boiling point; you’ll probably need your cycling helmet.

But although it’s exciting – the action is largely confined to cycling – mostly in straight lines, with a little showing-off stunt-work too. But anyone who’s not into bicycles probably won’t find this to be a particularly thrilling journey.

Koepp has previously earned his stripes as an all-round, big-budget writer and as a director of thoughtful, chilling, considered genre films; here he’s shown that he can direct action too – but he’s also demonstrated that if he’s concentrating on the action, he loses his grip on the writing; putting all his efforts into the directing let the script fall well short of his usual standard, in terms of both its characters and narrative. He needs to concentrate on one or the other.

Premium Rush is a visually interesting, thrilling ride, imaginatively directed and edited, but as far as the plot is concerned, it’s simplistic, unconvincing and full of just about every cliche on the East Coast.