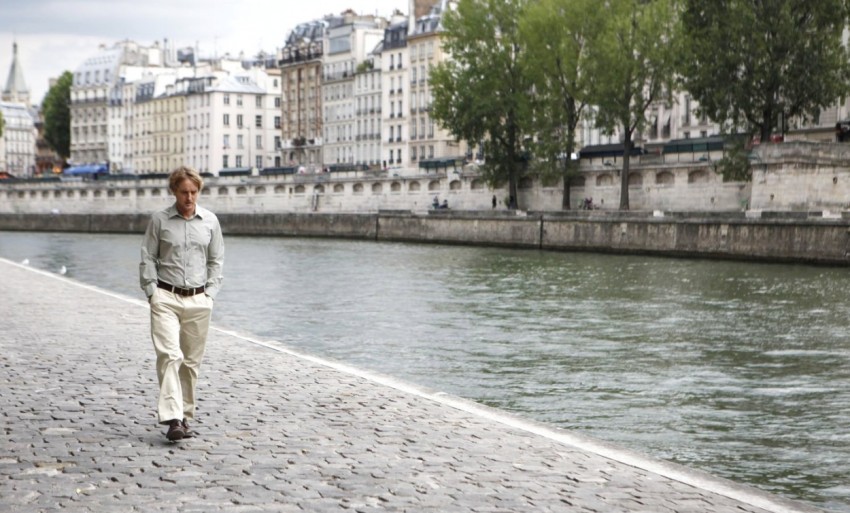 Gil (Owen Wilson) has it all. He’s a successful Hollywood screenwriter and he’s engaged to the beautiful and wealthy Inez (Rachel McAdams). But he’s not happy. Gil finds Hollywood to be shallow and wants to be a novelist. And as for Inez, she doesn’t seem to give him quite what he’s after. In truth, she’s sweet, but as shallow as Hollywood.
On a trip to Paris with Inez and her disapproving parents (Kurt Fuller and Mimi Kennedy), the group bump into an old friend, Paul (Michael Sheen), a supercilious, intellectual and cultural snob. An enthusiastic Inez and a foot-dragging, moping Gil end up hanging out with Paul and his wife. At one stately home, Paul ends up arguing with the tour-guide (Carla Bruni – yes, that’s the French First Lady herself), because he believes he knows more about French history than she does.
Desperate to escape the insufferable Paul and his own fawning fiancée, Gil ends up sloping off early from a night out and decides to walk back to the hotel alone, to work on his novel. He stops to enjoy the Parisian backstreets and at the stroke of midnight, a classic car pulls up and the occupants urge him to jump in and join them. Taken aback, he goes along with it and ends up at a party.
Is it a fancy dress party? Everyone seems to be dressed in 1920s attire. But when he gets chatting to other guests, he realises they all seem to share the names of some of the great writers and artists of the time – F Scott Fitzgerald (Tom Hiddleston), Ernest Hemingway (Corey Stoll) and Salvador Dali (Adrien Brody) to name but three. As the days go by, Gil finds more excuses to slip away from the group, just before midnight, and ends up living a double life – the frustration of his modern-day life and the artistically challenging and emotionally invigorating past, where he hangs out with his literary heroes.
But when Inez gets suspicious about Gil’s night-time trysts, he realises that he’s got some big decisions to make.

Opening with a lengthy love-letter to Paris – romantic music under street scenes, by day, by night, in gorgeous sunshine and in the rain – Woody Allen takes you to his city of choice and promises you magic. And he delivers.
I’m delighted to report that Midnight in Paris feels worthy of the Woody Allen name-tag, taking the writer-director back towards the intelligent comedies of his earlier years, such as Play It Again Sam or Annie Hall. It’s not one of his best, but it’s up there with them.
Owen Wilson is essentially playing a young Woody Allen, struggling with live and love, much as the auteur did himself in his earlier years. He’s got the part down to a tee, complete with the stuttering and muttering that peppered Allen’s idiolect.
Allen’s authorial touch is evident, with witty one-liners, overlapping dialogue and conversations going on in the background as we’re watching unrelated action in the foreground.
Because it’s all handled so neatly, the fantastical nature of the plot feels oddly believable and Wilson’s acceptance of his peculiar circumstances is presented with an equal love for Paris and the culture that developed therein at the start of the twentieth century.
Michael Sheen is the perfect smarmy antagonist – the character who would’ve been played by Tony Roberts hadAllen made this film in the 1970s. The rest of the ensemble cast – from the in-laws to the chattering artists – bristle with natural energy. And Adrien Brody’s Salvador Dali is a delight.
Getting Mrs Sarkozy on board is a masterstroke – in her first film acting role, she’s a natural. Cool, calm, confident and as comfortable batting off Sheen’s arrogance as she is nurturing Wilson’s insecurity.
Peppering the film with cultural icons could make some viewers feel a little alienated, but even if you’ve never heard of Zelda Fitzgerald or Gertrude Stein, it’s clear from the plotting that Gil knows them and so the plot convinces regardless. Perhaps the best joke of the film, though, will require a little knowledge of the work of Luis Buñuel – look up the premise of his film The Exterminating Angel before heading to see this.
On so many levels, Midnight to Paris is a return to form, nostalgic for history in general and Allen’s earlier oeuvre in particular, so it seems churlish to find faults, but that’s the job of a critic. It doesn’t so much as faults as failings – some of the characterisation is a little simplistic – the good are good, the bad are bad, the simple are simple, the angry are angry and few of the characters develop as a result of the experiences we share with them.
And while the film is a heart-warming and thoroughly enjoyable romantic fantasy, it’s not as deep or revealing about the human condition as Allen’s earlier work – perhaps simply because forty years has passed since he started exploring his familiar themes. If the message of the film is that love and art are good for the heart, our souls will be lifted but not advanced by this film.
But for a film to make walking in the rain seem appealing is no mean feat.