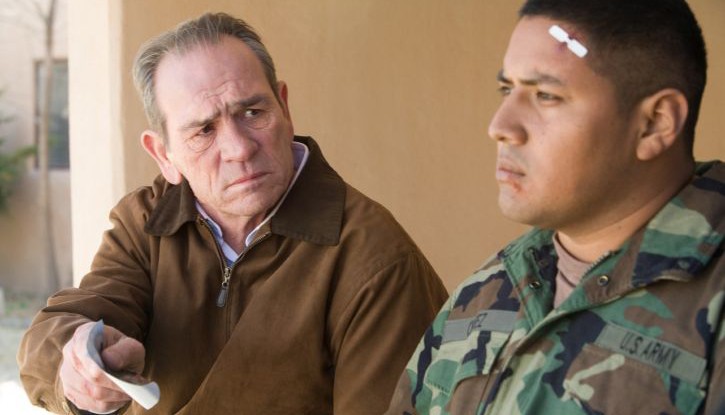 Lifelong military man Hank (Tommy Lee Jones) is expecting his son Mike to be returning from a tour of duty in Iraq, but the call he gets from the army base is not the one he was hoping for: Mike has gone AWOL.

Hank believes something is up – his son wouldn’t go missing without at least letting him know, so he sets off in search of Mike himself.

At the army base, Hank meets his son’s commanders and fellow troops, but none can suggest where he might be.

The police – including Detective Emily Sanders (Charlize Theron), who’s battling against misogyny of the highest order – get involved too, but are as unhelpful as everyone else.

It doesn’t help that the police and the military authorities start arguing over jurisdiction.

It’s left up to Hank’s old-school investigative skills to find the answer, as his country seems to be doing all it can to hide the truth from him.

This film exists on a number of levels – a missing-person mystery (a la Without a Trace), one-man’s fight against the world and another of the latest crop of films that are clearly aimed at showing us the futility of war. It’s another attempt by the US liberal elite to assuage itself of guilt on behalf of its proud nation.

The problem is that this kind of message is beginning to wear thin…war’s bad and people die…this comes as little surprise. Perhaps a more accurate description of this film’s message is “war makes good people do bad things…” but again, this hardly comes as a bolt out of the blue…just look at Nick Broomfield’s current docudrama Battle For Haditha – same war, different incident of good guys turning bad…but in Broomfield’s case, it’s at least based on true events.

In The Valley of Elah gives Tommy Lee Jones the chance to run the roost – even with a deliberately underplayed performance, he’s the dominant force throughout this. But it’s one of those films that feels like it thinks it’s more important and revealing than it is.

We see Charlize Theron trying to fight to be taken seriously by her male peers – this story strand seems to 1970s – perhaps small-town America really is still this chauvinistic, but here, it feels like a laboured caricature.

Susan Sarandon is wasted – a woman of her talent should not have been used to do nothing more than sit at the end of a phone line and sob.

The film is ultimately as worthy as it is worthless in revealing the true nature of humankind. It tells us many things we already know and it would perhaps have felt stronger had it not been for Broomfield’s more powerful and gripping tale of a real-life event in Iraq, rather than the aftermath – back home – of a made-up one.