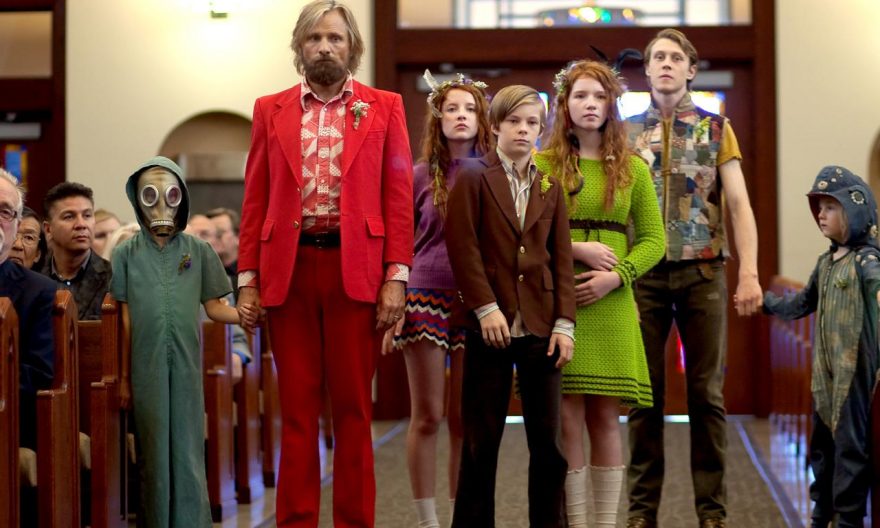 Ben (Viggo Mortensen) lives about as far off the grid as you can live in the US, bringing up his six children alone, educating them himself – in everything from literature and philosophy to wilderness survival techniques.

When a family tragedy forces him to return the clan to civilisation, he realises that the one thing he hadn’t prepared them for was the culture clash ahead.

A stop-over at his sister’s (Kathryn Hahn) highlights differences — between Ben’s precociously literate children and their video-game-addicted numb-skull cousins — and between adults with conflicting views about life.

But it’s his insurmountable clash-of-dogma with his traditional father-in-law Jack (Frank Langella) that poses the biggest challenge to Ben’s lifestyle and his relationship with his children.

The title, Captain Fantastic, is a little unhelpful. It conjures up images of yet another super-hero film, but this couldn’t be further from the big-budget, no brainer tent-poles churned out by the studios.

Matt Ross – better known as a bit-part actor – has come up with a debut feature, as writer and director, that is more challenging and thought-provoking than almost any film you will see this year and he manages to make it feel important, without being worthy, and it’s entertaining without being arch.

The story is warm-hearted and genuine, the script is delightfully voluble, the characters as believable as they are likeable and the themes mature, complex and engaging. Ross’s screenplay challenges everything from the education system to religion and societal norms, through an array of polemic monologues, speeches, lectures and snappy exchanges that never leave you feeling that you’ve been preached to. Depending on your own perspective, you might spot cathartic revelations, misplaced pride or discomfort at different points.

There’s a bit of fantasy in there – many of us dream of having total control over their own lives – but ultimately, it’s a film that’s grounded in reality, even if it takes a two hour long bus journey to get there.

Viggo Mortensen is the narrative heart of this story, as an ultra-libertarian, fundamentalist leftist Chomskyist atheist anarchist hippy – or something along those lines – but you don’t need to agree with or even sympathise with any, let alone all of his politics, philosophies or beliefs to empathise with a man’s mission to give his children what he believes is the best preparation for adulthood that he can. But you will need to share his passion for life and the welfare of his family to go with him on this road-trip, as we explore whether he’s the best dad in the world or the worst dad in the world.

He’s thoroughly convincing, as is Frank Langella, as his real-world counterpoint, who pulls off the complexity of balancing the narrative villain with the moral line that most viewers might naturally feel more comfortable walking, in this battle between idealism and pragmatism.

The always enjoyable character actors Katherine Hahn and Steve Zahn make their points perfectly, while George Mackay leads an impressive array of child actors, who learn and grow with their exposure to our world.

Captain Fantastic explores many familiar themes – such as the clash between theoretical knowledge and practical necessities – but with refreshing flair. To have a film that can be intellectually challenging as much as it can open your mind, tug on the heart-strings and elicit tears is rare these days.

Only a somewhat peculiar flight of fancy at the end of the film leaves you feeling somewhat confused but the journey up until that point has been so satisfying that such a minor oddity can be overlooked, as it’s so unusual these days to emerge from a film feeling better about being alive.

Captain Fantastic is not a super hero film, but it is a super film.