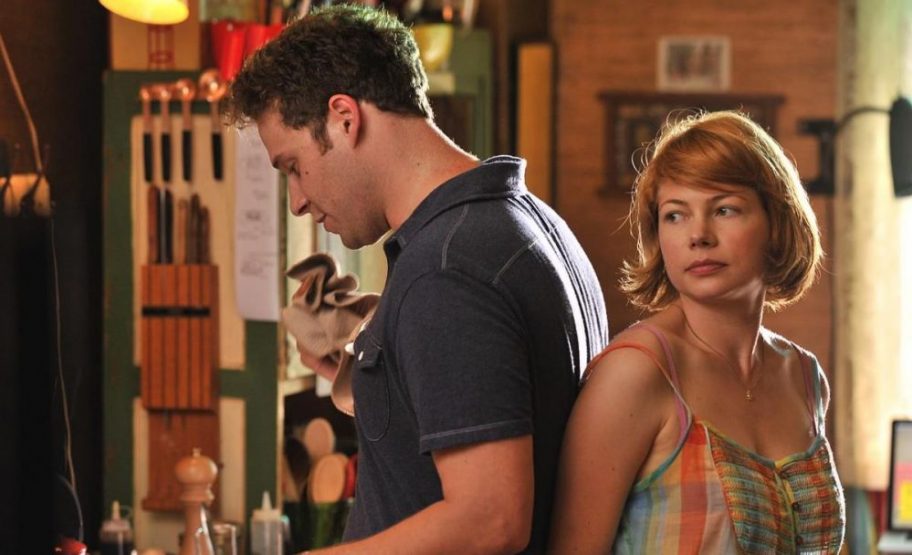 Canadian travel writer Margot (Michelle Williams) makes a connection with Daniel (Luke Kirby), an artist she meets during a business trip to Nova Scotia, only to find out that he’s recently moved in right across the road. How perfect is that?

There’s only one problem with this love story; she’s married to cookbook author Lou (Seth Rogen).

Lou isn’t a bad guy – he loves Margot deeply and she’s become closely involved in his whole family. But much as she loves feeling loved, there’s something missing from this relationship and the tantalising prospect of the hunk across the road is tearing her apart.

Is she excited enough about Daniel to risk giving up the family that’s embraced her since college, or should she work on her marriage and shoo away the temptation across the road?

Actress Sarah Polley once again jumps behind the camera for another heavy drama – which, because of the casting of Seth Rogen, has been wrongly categorised as a comedy. It’s not – although Rogen’s Lou often has a humorous take on the despair and gloom through which his marriage is struggling.

A misleading poster for this film suggests this is a story of a love affair between Williams and Rogen, but it’s quite the opposite. Clearly, Rogen sells movies better than the little known Kirby does. What’s more unforgivable about the poster is the way it boasts a plethora of good reviews. “Four stars – The Guardian” it cries. In reality, the Guardian’s Peter Bradshaw gave it just one star. How can distributors be allowed to get away with that?

The film plays like a quirky low-budget American independent – although it’s funded and set in Canada, but it has that slightly self-absorbed pretension.

The story kicks off with a range of coincidences – the man who teases her during a job ends up in the next seat to her on the plane – and turns out to live right opposite.

She’d never noticed him before? Really? A hunk who starts and finishes every day by pulling his rickshaw out of the garage? The plot asks us to believe he’s only recently moved in – long enough ago for him to have covered every space in the apartment with his art.

We learn little or nothing about the past – or indeed present – of Margot or either man – so we can’t really empathise with them any more deeply than on the surface.

Some of the ideas considered by the film are interesting – what makes a good marriage – whether you should risk a boring but secure relationship for what could be no more than a fling with a flighty artist – for example.

Lou’s idea that dinner with his wife shouldn’t need to involve too much conversation as they don’t need to “catch up” is refreshingly down to earth and Daniel’s assertion that he won’t make a move on Margot as she’s married, so it’s up to her to take the initiative if she wants to be unfaithful makes him more of a bystander than an antagonist.

The film is unclear about what it believes Margot should do – what is the moral thing to do – but it does allow Lou’s alcoholic sister, played by another comic, Sarah Silverman, to make a judgement which appears to be Sarah Polley’s view of whether Margot has made the right decision.

One of the main problems with the film is that the central character herself is miserable and selfish, so it’s hard to will her to do the right thing. You feel more sorry for the guys – even the sexy hunk across the road – than you do for the tormented woman who has the choice of whomever she wants.

And it’s oddly grounded as much in fantasy as it is in reality, as the local swimming pool seems to stay open for impromptu private sessions – and people too often seem to find themselves in the right place at the right time for the plot to unfurl.

It’s not an awful film, but the central character isn’t as likeable as the men she’s juggling, the mood is uneven and the emotions confused.

That said, anyone unlucky – or indeed lucky – enough to be in such a situation might well feel equally confused and attract a similar lack of empathy.