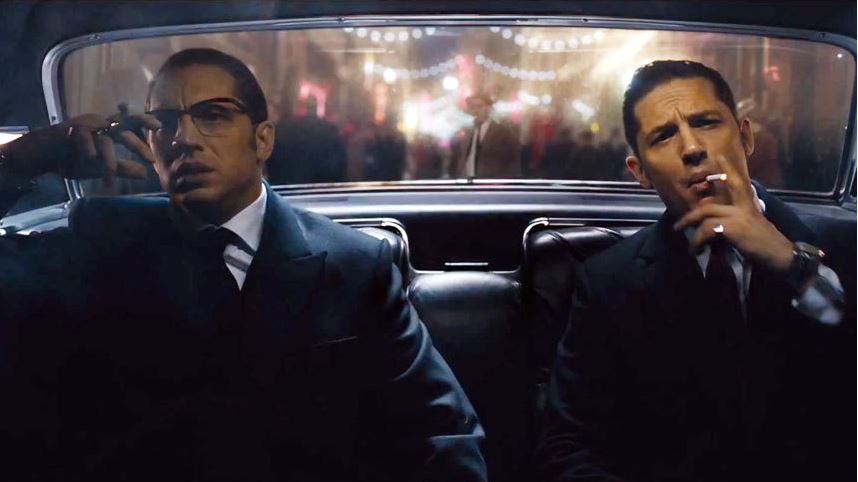 By the mid-1960s, the Kray Twins, Ronnie (Tom Hardy) and Reggie (Tom Hardy) were already the kings of the north London underworld – and growing in reputation as club owners too.

When Reggie began a relationship with Frances (Emily Browning), the sister of his driver, Ronnie became jealous and even more unhinged than he already was.

Reggie’s marriage to Frances went down about as well with his jealous brother as it did with her mother (Tara Fitzgerald), worried about her daughter’s association with the most feared of gangsters.

As the pair continued to spread their influence, across both the underworld and clubland, they made enemies of a number of fellow gangsters and the police officer (Christopher Eccleston) who was determined to bring them to justice.

But with Frances increasingly feeling pushed to the sidelines, Reggie had to think hard about where his loyalties really lay – with his wife or his brother – respectability or violence.

There are few people who won’t know anything about the infamous Kray Twins, going into this film, but depending on where their knowledge comes from, viewers might come out shocked or somewhat nonplussed.

There seem to be as many versions of the events depicted in this film as there were people involved in them and it’s certainly a very different telling of the story from the previous big-screen version, that featured Spandau Ballet’s Kemp brothers.

Interestingly, both films are told from a female perspective – but while the first depicted the whole lives of the Krays from the point of view of their feisty and domineering mother, this time we glimpse only a couple of years at the height of their notoriety, as witnessed by Reggie’s wife.

This inevitably makes Reggie the more sympathetic of the two brothers, ensuring that Legend portrays Reggie Kray as a misunderstood businessman who might have been an upstanding citizen if it weren’t for the influence of his deranged twin.

One of the hardest things about a biopic is deciding which element of the lives to depict and while choosing to tell the story from Frances’ viewpoint restricts the narrative to the years in which she was around, it leaves the uneducated wondering how on earth these bonkers brothers ever rose to the top of their professions.

The film does, at least, fairly convincingly portray the main incidents that eventually brought the brothers down, and presents an interesting twist on Reggie’s motives for doing what he did, although certain elements – such as the tensions in his marriage – feel more arch.

In a story that will be familiar to many, it’s sometimes the asides that offer the most satisfaction; Ronnie’s homosexuality is tackled head-on, making it interesting to see that, at a time when same-sex relationships were not as accepted as they are now, no-one dared challenge Ronnie – or at least no-one got away with it if they did.

The period is well handled – assuming it’s true that there were only three cars in the whole of east London in the mid 60s – and there are a handful of impressive enough supporting performances, from the likes of David Thewlis as a smarmy, self-serving accountant and Paul Bettany as a somewhat underused rival gang boss. But the only real reason to see this film is for Tom Hardy’s twin performances as the (mostly) charming Reggie and the completely unhinged Ronnie, with only a pair of glasses and a set of false teeth to tell them apart – both from the point of view of how he pulls it off and how the director pulls it off.

As you’d expect, there is plenty of violence; a couple of choreographed set-pieces stand out, including a bar-room brawl between the two Tom Hardies – if that’s the correct plural?

But it’s hard to pinpoint the target audience for this – it’s not really for those who like gangster films, as it’s more about the brothers than their gang activity – but their story has already been told on the big screen – and it’s always hard to please historians.

The narrative also seems to lack direction, not least because a film that’s ostensibly about the two brothers is centred on the wife of one of them, presumably because she’s a more sympathetic character – but she’s a less interesting one and, arguably, a minor player in – as the film-makers chose to call it – this East End Legend.