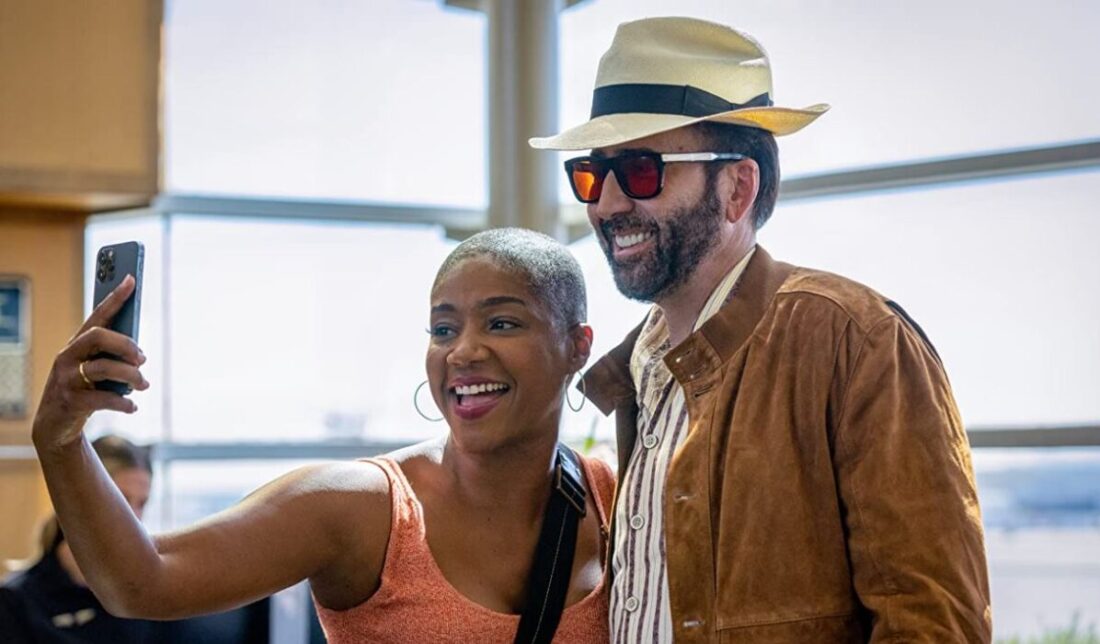 Nicolas Cage – yes, the actor Nicolas Cage – is going through a messy divorce from his wife Olivia (Sharon Horgan) – and he’s not getting the great roles he feels he deserves.

He’s running low on money and the best gig his agent (Neil Patrick Harris) can find is for him to attend the birthday party of a wealthy fan – in Majorca – for a $1m fee.

Desperate to pay off some debts, he accepts the job and surprises himself by becoming friendly with Javi (Pedro Pascal) – a self-made millionaire, whose olive groves have made him the most wealthy man in the region. Sharing his passion for film with Javi, as they relax by the pool, with wine, Cage realises he’s actually enjoying the trip.

But life is never that simple. He soon finds out that the FBI are watching the pair closely; they believe Javi is actually the head of a global arms gang, who’ve kidnapped a politician’s daughter, and force Cage to gather evidence from his compound to capture the crime boss – and rescue the hostage.

Hollywood likes nothing more than feeding on itself – and films like this go a step further, with the star feeding on himself.

Stars playing versions of themselves has been done many times now, most famously John Malkovich in the film that bore his name, but more recently, Matt Le Blanc in the BBC’s TV sitcom Episodes or David Duchovny’s cameo in Netflix’s The Chair. It’s often a brave decision, because audiences will forever associate the star with the grotesque way in which they send themselves up, but Cage is so often parodied for his over-the-top Nicolas-Cage-style of shouty overacting that he might as well have a go himself. But just to ensure that we remember the best version of Nicolas Cage, in this film, as well as the empathetic, troubled actor going through a midlife crisis, he also portrays himself – as the little devil on his own shoulder – as a floppy-haired Wild At Heart-era Cage, who’s even more shouty than the protagonist.

Films don’t get much more “meta” than this – layering a perfectly serviceable comedy-action-buddy-thriller over a Hollywood satire, with the “star plays himself” element as the cherry on top. The more into films – and specifically Nicolas Cage – you are, the more of the references you’ll get, but there’s enough in there for newcomers to enjoy.

The story is – of course – as preposterous as it is predictable, with a twist or two thrown in just to keep you on your toes – but it’s undeniably fun, as Cage collaborates with his host on a screenplay while helping the CIA establish whether he is in fact a crime boss.

The satire riffs on Hollywood cliches but sometimes gets a little lazy and derivative, with elements of the plot feeling more of a copy than a parody or homage.

Cage is clearly having fun with both of his roles and Pedro Pascal makes an effective enough foil for this bromance, but Sharon Horgan is underused, given her comic prowess.